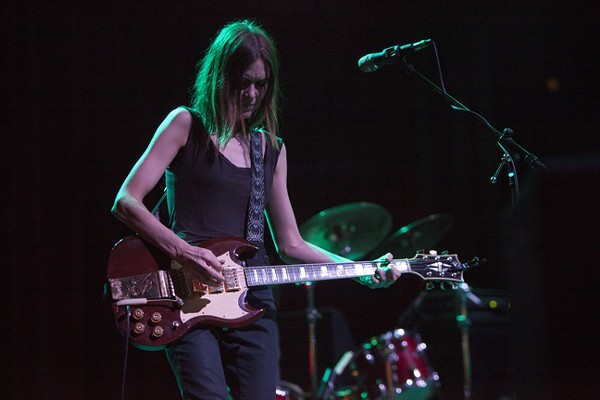 Two-thirds of the way through Juliana Hatfield Three's hour-long set at the Neighborhood Theatre on Monday night, I noticed a man standing in front of the stage holding up his cellphone, taking video of the 47-year-old singer. Nothing new nowadays, right? Without missing a beat, Hatfield turned inward toward her bandmates. A moment later, she moved back on the dimly lit stage, a few steps toward the drums. As the song ended, Hatfield moved back to her original spot and told the crowd, "I'm always in the same place on this tour and wanted a different view."

To me, it looked like she didn't want a cellphone distracting her. .. but perhaps a one-minute change of scenery was needed.

A few songs into the band's brief encore, though, a woman in front of the stage was taking pictures with her phone. As the flash went off multiple times, Hatfield once again grabbed her mic stand and moved back on the stage. It wasn't long after that the show ended.

On other tour stops, the band played six or seven songs before calling it a night. Charlotte got four, with the only new song being "Wood." Hatfield and her reunited trio's main set consisted of their entire 1993 debut Become What You Are. The small crowd appeared to enjoy every moment, singing along at times, moving to the beat, cheering on the familiar. When the band returned for its encore, Hatfield said they were going to play "a few old songs and a few new ones" from their sophomore album, 2015's Whatever, My Love.

Was it all the cellphones? Was it the small crowd? Was it simply time to call it a night? For just over an hour, the Juliana Hatfield Three were on cruise control. Bassist Dean Fisher bounced around the stage while drummer Todd Phillips flashed smiles at his bandmates. It's no surprise the introverted Hatfield was reserved, though moments of guitar brilliance flashed forth at times as she let the notes wander and flow from her fingertips.

Sure, there were times when it looked like Hatfield was simply going through the motions, but it was never evident in the music. Her sweetly toned vocals were on point, hitting all the notes from the album of yesteryear. The songs sounded great ... and then it was over.

Maybe I should blame Charlotte? Small crowd turnout and cellphones held on high could dissuade any performer.

Maybe I should blame the Internet? If I hadn't seen that Hatfield had played a few more songs at other dates, I wouldn't have had any expectations. Then again, she did tell the crowd they had "a few old songs" and "a few new ones" to play. Does four count as a few? Perhaps.

Maybe I should blame myself? Being a fan of Hatfield since her first solo album, I was hoping to hear a lot more. At least all I did hear sounded great. If you're in the Carrboro area tonight, be sure and catch the final night of the tour at the Cat's Cradle.