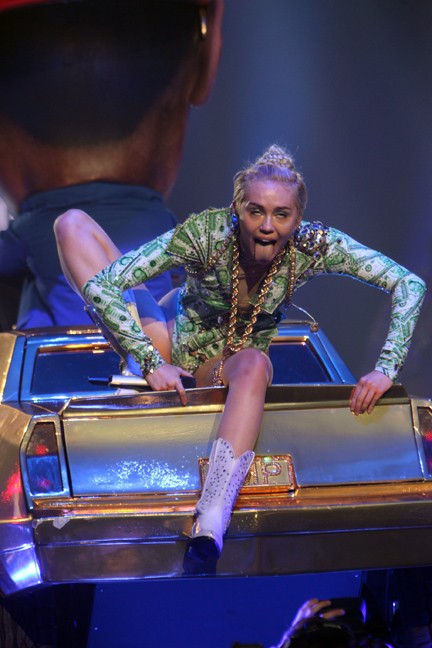 Miley Cyrus’ Bangerz concert tour finally made its way back to Charlotte last night. After abruptly canceling her April 7 show 30 minutes before it was scheduled to start, Cyrus looped back around and brought her insane two-hour spectacle to Time Warner Cable Arena’s stage on Aug. 6, 2014.

Considering Cyrus was supposed to be here oh, four months ago, an apology was definitely expected by the mostly filled arena (though most of the upper level was curtained off) before she got too far into the show. “For any of you guys who were on the way to this show last time, I apologize,” she said. “Better late than never!”

For the last year, it seems like all anyone talks about when they mention Miley Cyrus is how sexualized she's become since shedding her alter ego Hannah Montana. And by shedding Hannah Montana, we mean growing up. The hyper-sexualized Bangerz Tour seems like the only way to officially sever the cord that held her Disney days in tow — at least to Miley. In fact, the Bangerz tour is so hyper sexualized in its very nature that even upon airing a butchered and highly edited version of the show, NBC STILL got hit with a list of viewer complaints and is now being investigated by the FCC. 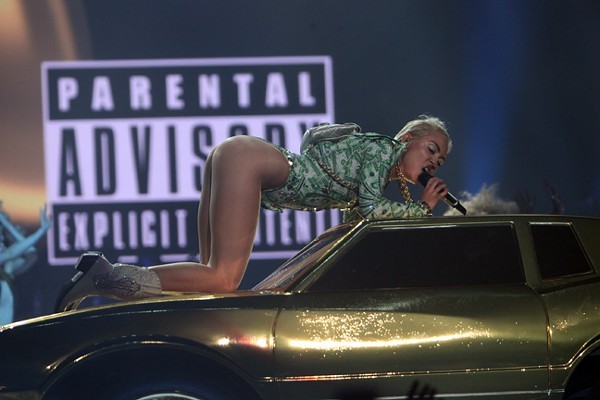 The performance is exactly what you'd expect from the “new” Miley: it's loud, it's over the top, at times it makes you feel like you must be tripping (thanks to some insanely imaginative and sometimes creepy video sequences). And yes, it's so hyper-sexualized it actually doesn't even feel remotely sexual. It's as though it's so planned out and hyped that by the time you actually get to the concert, you’re desensitized. Miley stroking the tits of a little person while simulating oral sex in a bed with three dudes? No big deal. Occasionally slapping her vagina? It's like a high-five. Air humping in a thong on top a car? Yawn.

Since the Bangerz tour has been in motion since February, we assume you've got the gist of how this tour has gone. However, there's still a former Disney child star at the helm of a controversial show, and between Miley's crazy antics and her fan's die hard attitudes? There was A LOT to be seen. And heard. And gawked at. Let us break some of it down for you: 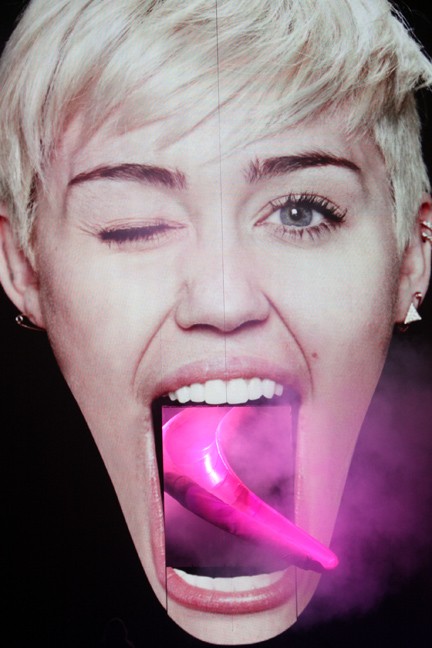 There was A LOT of competition for what could be dubbed the “strangest” things those in attendance saw on that stage last night, so here's the top five:

1. The grand entrance: that is, Miley’s giant face on the screen, mouth opening, and a giant tongue slithering out of the mouth. Yes, Cyrus did, in fact, slide on stage down her own tongue.

2. Cyrus, upon taking the stage for her encore, licked the crotch of a barbie doll. Shortly before she simulated oral sex on a guy dressed like Abraham Lincoln.

3. Miley encouraging the crowd to make out with anyone, “even a stranger,” for "Adore You" on the kiss cam. Cue several awkward encounters of female friends going in for the kill and pretending they TOTALLY kiss girls. Like, all the time.

4. The merch booth selling Miley Cyrus rolling papers. At $25 a pop, no less.

5. Miley being strapped to a giant flying hotdog by a very polite guy dressed as a bottle of mustard. 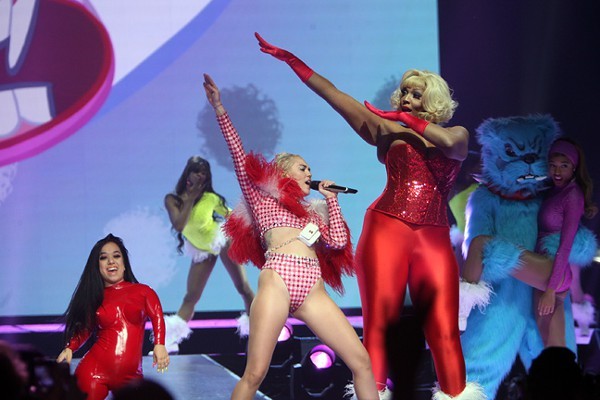 The first thing Cyrus says to Charlotte when she addresses the crowd:
“I know I'm in the right place tonight, because I bet we got a lot of rednecks in here tonight! You fucking hicks.”

From a young girl dressed in hot pants, a leotard and Miley's signature pigtail buns outside Time Warner Cable Arena, where a horde of Miley look-alikes converge:
“Ugh can you believe her? She's, like, trying to be a clone of Miley! How unoriginal.”

Man in the crowd, singing, as he’s rushing through the front doors:
“I'm coming in like a wrecking balllll!!! Now where's the bar.”

A mother reassuring another mother of the PG status of the show as they escort their three teenage girls into the arena:
“I mean it's just Hannah Montana. Sara showed me the show, how bad can it be?”

The teenager sitting behind me scoping out the crowd to her friend, very seriously:
“Like, everyone here is dressed the same.... but at the same time? They're, like, not.” 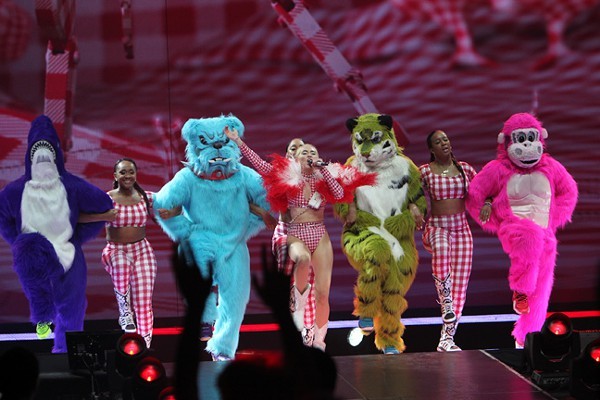 Drunk, party of four takes their floor seats where girl A proceeds to pass out before the show has started. Girl B grabs a tight hold of her hair to keep girl A's head up. Moments later, girl A throws up on herself and girl B. Girls C and D scatter. As people around them clear out and security addresses the situation, girl B slurringly tries to reassure them all:
"She's fine. She's just sick. She's fine."

Mother and daughter at concessions, daughter wearing Miley's trademark hot pants and bra top:
Mom: “Now are you happy? That's why I told you not to dress like that!”
Daughter, sadly, to friend: “Some guy outside told me I was going to hell for dressing like this.”

Tipsy woman to group of friends, all wearing Miley Cyrus' face on a T-shirt:
“I'm so excited I'm gonna throw up! OH MY GOD can we take a selfie?!”

Miley to the back row during “Get it Right” (and after spitting a bottle of water on her fans):
“This song is for you guys in the back who I didn't have the pleasure of getting wet, hopefully this song will take care of that.”

At the merch booth after the show, between two sisters debating the merits of a certain souvenir:
Sister 1: “Dude get the Miley Cyrus rolling papers!”
Sister 2: “I totally want them... but if I do, Mom will know I smoke. So, I probably shouldn’t.... I’m not stupid!”

While walking toward the parking decks after the show:
"I don't think you understand. She rode a frickin' hotdog. How is that NOT the best day of your life?" 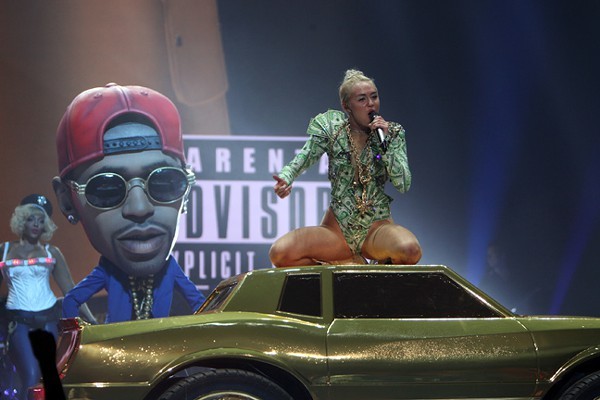 On My Own
Someone Else