More than halfway through her show, musician Lindsey Stirling finished a cover of John Legend's "All of Me" when she addressed the crowd. On this Friday, a funeral was being held for her recently deceased grandmother and Stirling had nearly canceled the show. "My grandmother never got to see me perform live," Stirling said, holding back tears. "She was bed-ridden for the last 10 years, but I know she's here with us tonight." Stirling then started the somber "Take Flight" as she strode across the stage.

It was one somber moment in a concert that was focused on its high-energy output, EDM-infused performance and, of course, plenty of dancing. Stirling, who first found fame on the America's Got Talent stage in 2010, has since made a name for herself as the "dancing violinist" combining her talent as a classical violinist with her passion for dancing. 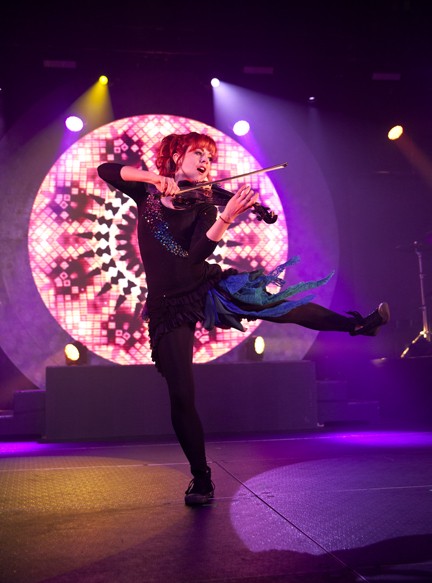 Stirling found a way to make total use of the space available as she kicked, leaped and pirouetted her way around the stage. The music was a unique balance of classical overtones, thanks to the violin, and thumping bass beats. The sold-out venue was filled with people of all ages either dancing or watching every move the constantly smiling Stirling made.

A couple of costume changes were interspersed within the set without becoming distracting. She shed a black outfit in favor of a glow-in-the dark green bodysuit; she later wore a fairy-like dress before playing a "Legend of Zelda" medley that borrowed heavily from the game's theme song.

Live, Stirling's performance takes on a new level of respect as you see her stiff left arm holding the violin while her body twists, contorts and moves around. She never misses a note or beat as her music carries the listener on a whirlwind of instrumentals. She occasionally told the crowd stories behind the songs and their meanings, but, as with most instrumental music, it's mainly up to the listener to create a story or emotion for themselves from the songs.

A large round video screen at the back of the stage helped illustrate some of the music's themes and also provided backing vocals from Meg & Dia's Dia Frampton for "We Are Giants" and Lzzy Hale for the set-closing "Shatter Me." It also showed some home videos of a young Stirling dancing as a child that gave more context to how far she has come over the years.

"People said I'd never have a career as a dancing violinist," Stirling said, thanking the crowd for their years of support. "Without you, I wouldn't be living my dreams right now."