We're a little late in linking the Village Voice's annual Pazz & Jop poll, and if you're a music geek you've no doubt already checked it out. But for the rest of you, the Voice's 2012 poll looks a little like Creative Loafing's own best-music lists this year. Frank Ocean, which topped my personal Top 10, also topped the Voice's list this year, and other CL faves, including Kendrick Lamar, Fiona Apple, Swans and Japandroids, also fared well at P&J. 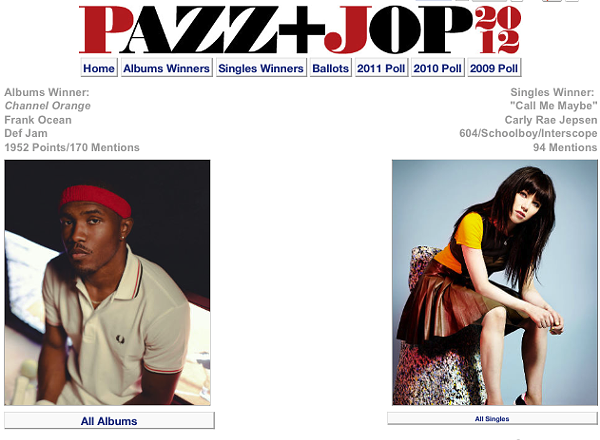 For decades, Pazz & Jop was the final word on great music each year, particularly when veteran music critic Robert Christgau was in charge of it. The poll remains important, although in the digital age it is far less influential than it was from the '70s to the '90s. Still, Pazz & Jop remains the most exhaustive poll, includes the largest group of voting critics from around the country and features some of the best essays and comments.

It seems so long ago - certainly more than 52 weeks - since we were all a fluster at the audacity of Lana Del Rey. Her crimes, it seemed, were legion and very, very serious - far beyond whether her music was good. She was not good on Saturday Night Live. Her lips, perhaps, had collagen in them. A few years ago, she was playing A&R showcases with hired guns in an ugly blouse, and now she was all over Pitchfork like she was a real-deal indie ingénue, but it turned out she already had a deal with Interscope. Her name was not actually Lana Del Rey, and unlike any artist in the history of ever, she went to private school.

As we bust Hey Kool-Aid-style into the new year with a clean slate and hindsight, it seems fair enough to chalk up our lil' Lana freak-out as part of the continuing and long-standing issue with female ambition and the idea that image consciousness is somehow antithetical to making true art, an insult against rock's visceral heart. It's a problem we tend to have with girls and women more than with the boys (word to Jack White's continuing Campaign 4 Rock 'n' Pop Realness). This past year proved there is a special sort of animus reserved for women - Lana Del Rey, Taylor Swift, and Grimes's Claire Boucher - whose ambitions seemed especially naked and, if you will, feminine.

For the entire piece, go here.