You probably missed it, but over the weekend, Knight Theater became one of the premier concert venues in town. The difference? An acoustic shell that Charlotte Symphony flight-tested in two separate pops programs - Friday evening's Buddy Holly-Richie Valens-Big Bopper tribute and Saturday morning's LolliPops ode to "Dancin', Rockin', and Hip-Hoppin'." 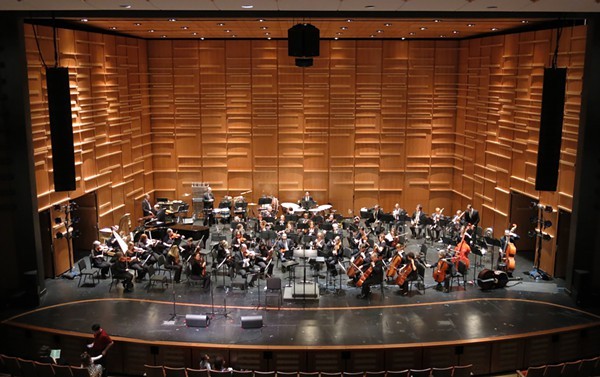 For more than three years since the Knight officially opened early in 2010, the hall has been the prime nesting place for NC Dance Theatre, visiting dance troupes of national stature and touring theatre productions that felt at home in a more intimate, Broadway-sized house than at mammoth Belk Theater or Ovens Auditorium.

The Symphony missed the boat. Former Symphony maestro Christof Perick and managing director both spurned the Knight as a concert hall when blueprints were finalized and construction was in the works. But as the Book of Exodus says, "there arose a new king over Egypt," and no one has been more enterprising or visionary than current maestro Christopher Warren-Green in seeing and developing the potential of the Knight.

Previous forays into the Knight, first in the KnightSounds series and last spring with the transplant of the LolliPops, have been glorious in every respect except the sound. What didn't escape into the wings and the flyloft was tousled on its way to the rear orchestra and the grand tier. So the addition of a new acoustic shell, which reporters who toured the Knight in 2009 were told that Symphony had rejected, was suddenly fast-tracked.

Damn, it's nice. Its design echoes the Knight's walls and the façade ringing the grand tier. The sound that I heard from the Symphony and their LolliPops guests, Project Trio, on wide variety of rep, was crisp, sharp and lively. A few bars of Bernstein's "Overture to Candide" were all I needed to judge Symphony's new sonic cocoon a success. But there were other rousing warhorses to delight the enthusiastic crowd, the opening movement of Beethoven's Fifth, embellished with a Project Trio disco prelude, and nothing less than the mighty "William Tell Overture."

Geezer rockers were able to groove to Project Trio's exhumation of Jethro Tull's update of Bach's "Bouree," with PT flutist Greg Pattillio going Ian-Anderson-bananas on the solo. There was even a chance to hear some quiet music in the new acoustic environment, though there was some restlessness among the ankle-biters when "Cherry Blossoms" lulled the pulse.

It was all good, even in embryonic form. There was space between the brass and the rest of the orchestra rather than Plexiglas, and the percussionists were right on top of the woodwinds. I wouldn't want to fit the full orchestra and Oratorio Singers in that shell, that's for sure. So if I'm dubious about a Mahler or a Beethoven Ninth at the Knight, I'd already rate it better acoustically than Ovens Auditorium or Halton Arena or - certainly! - Dana Auditorium. When it can accommodate all the necessary performers for a classical work, it's on a par or better than the Belk.

Acoustic rock, folk and jazz acts who can more than fill the McGlohon Theater will no doubt also be looking at the Knight once the word gets around. With all the jazz and chamber music series happening at the adjoining Bechtler Museum of Art, Charlotte not only has a wonderfully upfitted concert hall, they have a new musical hub.