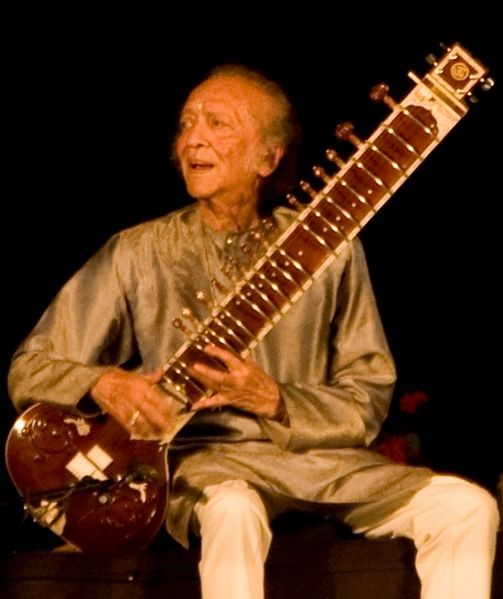 Not only that, but Indian classical music composer Ravi Shankar, who died Tuesday at 92, helped change the course of popular music around the world when he became a teacher and mentor to Beatles guitarist George Harrison. Shankar taught Harrison how to play the sitar - that shimmering whirlwind of strings that sounds like a cross between a guitar and a harp. It's the sound heard on numerous Beatles songs, most notably "Norwegian Wood (This Bird Has Flown)," on the 1965 album Rubber Soul.

According to the New York Times...

Mr. Shankar had suffered from upper respiratory and heart ailments in the last year and underwent heart-valve replacement surgery last Thursday, his family said in a statement.

Mr. Shankar, a soft-spoken, eloquent man whose performance style embodied a virtuosity that transcended musical languages, was trained in both Eastern and Western musical traditions. Although Western audiences were often mystified by the odd sounds and shapes of the instruments when he began touring in Europe and the United States in the early 1950s, Mr. Shankar and his ensemble gradually built a large following for Indian music.

Shankar's influence extended well beyond the Beatles and other popular artists who incorporated the sitar into the psychedelic-tinged music of the 1960s. He introduced jazz musicians like the North Carolina-born saxophone legend John Coltrane (who named his son Ravi for Shankar) and avant-gardists such as Philip Glass to Indian melodic structures and styles, including the raga - styles that also have been incorporated into hip-hop and electronic music over the past couple of decades, due in large part to the popularity of Bollywood films. Harrison later called Shankar "the godfather of world music."

Shanker was the father of American singer/songwriter Noah Jones and Indian classical music composer Anoushka Shankar, who followed in her dad's footsteps, becoming a sitar virtuoso in her own right. For more on Shankar's life and death, see Allan Kozinn's obituary in the Times, and look for my reminiscence on the importance of Shankar's contributions to popular music to be posted here later.