Earlier today, Charlotte's NBC affiliate station, WCNC, reported that Rick Ross had cancelled gigs in Greensboro tonight and Charlotte tomorrow because of death threats from a North Carolina faction of the Gangster Disciples. News of the threats immediately went national.

The Maybach Music Group Tour stop at Bojangles Coliseum was scheduled for 7:30 p.m. Saturday and also included Meek Mill, Wale, and Machine Gun Kelly. None of the acts will be performing. The threats against Ross came in a YouTube video in which members of the Gangster Disciples, all dressed in dry-cleaned bandanas, and couture gangwear, issued a "public service announcement" warning the rapper not to perform in North Carolina. 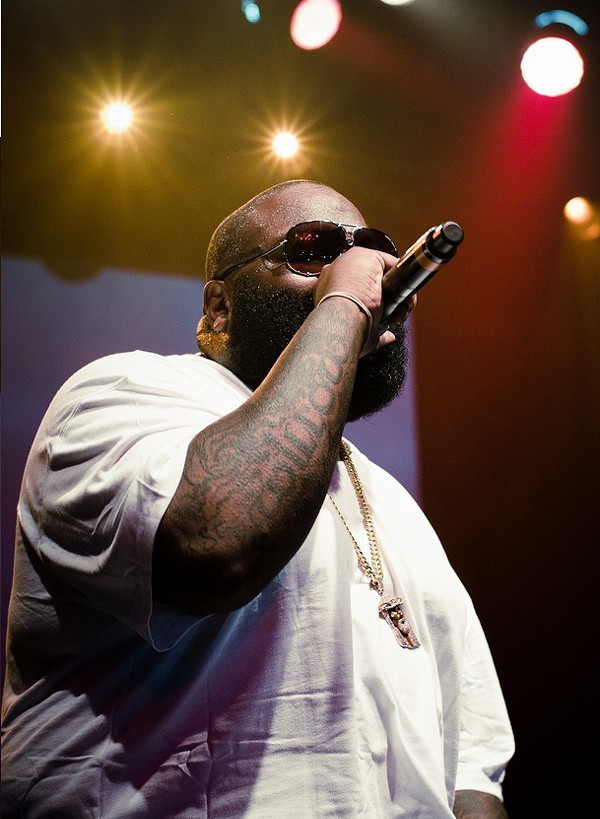 The gang's unnamed spokesperson spoke directly into the camera and articulated his disgust with Ross. "You done really disrespected the organization [Gangster Disciples] by putting your face in this star right here," he said, pointing to a picture of the Star of David on his T-shirt. "It ain't nothin' but three people that rock this star: the Jews, the GDs and the Illuminati." He's right, though, the Star of David does kind of belong to Judaism and the, uh, Illuminati. Which reminds me of the time I stood next to a group of black people at a music festival and they kept on screaming into an iPhone at Siri, asking her if she was a part of the Illuminati, but I digress.

Back in October, when Ross' Black Bar Mitzah mixtape was released, I expected tons of outrage to start pouring out from the Jewish community against the rapper's choice of cover art - Ross, the fictional cocaine-dealing rapper, dressed in a fur coat on top of the Star of David. It didn't cause a religious uproar, but it hurt a lot of gang members' feelings. Ross had desecrated their gang symbol, falsely portrayed himself as their gang leader, Larry Hoover, in his song, "B.M.F"; because of that, he owes them an unspecified amount of money. Ultimately, there's no way for Ross or anyone on his MMG label to avoid paying this debt, especially if he wants to continue to perform anywhere in the continental United States.

The Gangster Disciples spokesperson was very clear about this in the YouTube PSA: "The pressure on. We lettin' your promoters know, before you book Rick Ross, y'all need to talk to us," he said, as most of his gang affiliates shot imaginary pistols at the camera.

The sad thing about all of this is that there are tons of Rick Ross, Meek Mill and Wale fans in both Charlotte and Greensboro who won't get to see a damn good concert because of the ridiculous, shameful acts of an ignorant street gang. The saddest part, though, is that the greatest, living rap entertainer and "Wild Boy" himself, Machine Gun Kelly, doesn't get to run amok in the middle of all of this drama and save the day.