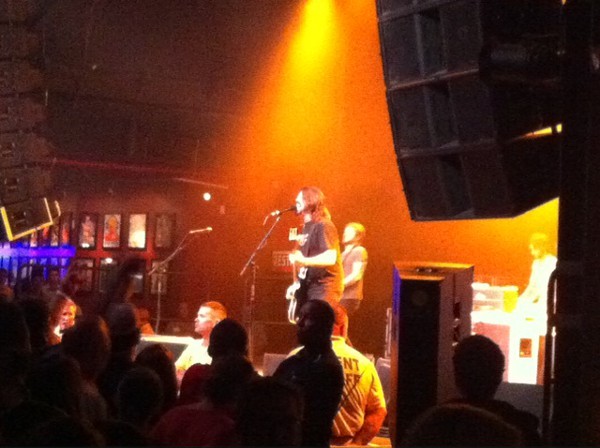 On Wednesday night, during the Democratic National Convention in Charlotte, in the more intimate setting of the Fillmore, Grohl made a similar promise. "We're going to play as long as we can, and as much as we want," he told the crowd. And once again, he wasn't kidding around. Grohl and Co. went on to perform their longest show ever, clocking in at three hours and 20 minutes with a setlist comprised of 36 songs — including a 15-song encore. (The band's previous record was a 2011 concert in Australia that clocked in just over three hours.)

Foo Fighters, performing for a Rock the Vote event, were cranked up to 10 from the opening notes. Grohl, decked out in black jeans and a black ABBA T-shirt, ran onto the stage as the band launched into a opening salvo of "White Limo," "All My Life," "Rope," "The Pretender" and "My Hero."

"This is the biggest place we've played in a while," Grohl joked. "There have to be at least 1,000 people here." Though last week they told a Reading Festival crowd it was their "last show for a long time," Foo Fighters have showed no signs of slowing down and the fans — who helped the venue sell out in record time — soaked up every note.

The earliest hint that it was going to be a long night was when, after more than an hour and a half into the show, Grohl commented, "Can we do whatever the fuck we want to do?" before starting a cover of Wings' "Jet." It was one of a handful of covers the band played, in addition to Tom Petty's "Breakdown," Pink Floyd's "In the Flesh" and The Who/Mose Allison's "Young Man Blues." 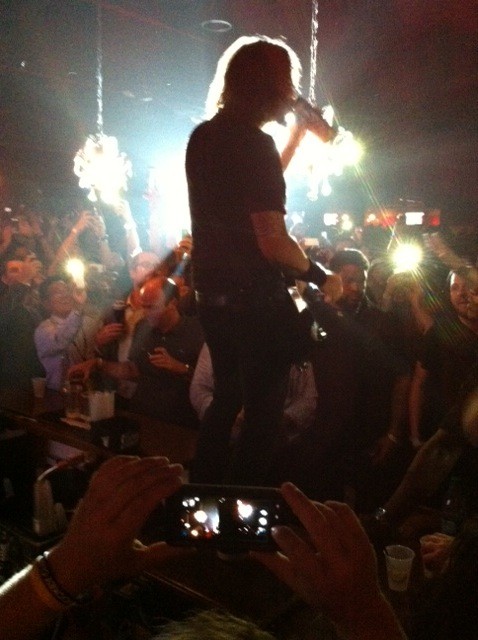 During "Monkey Wrench," Grohl left the stage to head into the VIP area where he stood on the bar for a brief moment, before making his way across the room to stand on another bar — grabbing a swig of Miller Lite along the way.

But it was the encore that helped the band break its own record. Three songs into the encore, Grohl asked guitarist Pat Smear if they should just play the band's entire first album before performing "Big Me" and "For All the Cows."

Between songs, Grohl would consult with the band about what to play next, often calling for a differently tuned guitar. Though he threatened that there would be mistakes, the group continuously delivered on whatever song they decided to play, aside from a few lyrical errors during "See You." "I keep looking down at the last song on the setlist, but I don't want to stop," Grohl said.

Obscure songs such as "Winnebago" and "Alone & Easy Target" were snuggled up against "Breakout" and the apropos "Exhausted" before the band finally reached its finale with "Everlong."

At the end of the night, Grohl summed it up best — "That was just crazy."