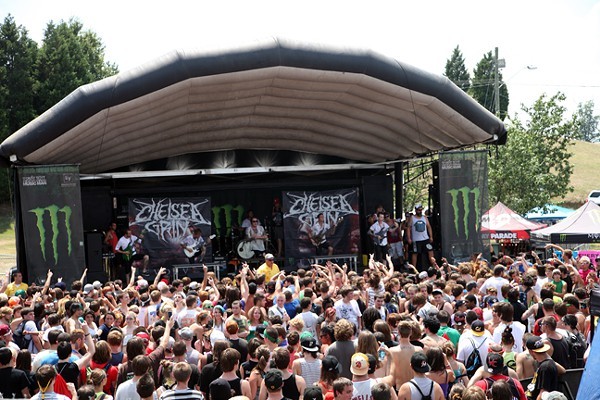 Another Vans Warped Tour has come and gone, bringing more than 50 bands to the masses. The only real problem with Warped, besides the blazing hot sun and the three-dollar water, is not having enough time to check out all of the awesome new talent and all the old favorites that continue to rock our faces off. So here are just a few highlights from the day — from Stepdad to Taking Back Sunday, which brought so many awesome new bands to the surface that it was nearly impossible to play favorites.

Stepdad (the newbie)
Warped has always been a platform for new bands to launch and has been growing more and more musically diverse over the years. Come on, it’s evolved so that Katy Perry has played the same stage as Chiodos. It’s set the stage to bring some lighter fare to a crowd that is die-hard for their brand of choice.

Michigan-based Stepdad is probably one of the more memorable newbies on the tour this year. It’s not just their sound that sets them apart, but also their attitude: for a group as talented as they are, they’re insanely modest “I’ll be honest, our CD sounds better than we do live,” says keyboardist Ryan McCarthy. “The other guys in the band are great musicians, so that’s good — I can barely play.”

You’d never know it when the electro-pop group hits the stage. They definitely seem to know their way around their instruments, not just playing them, but also adding in electronic sounds that make their set sound ethereal without missing a beat. Still, McCarthy insists it’s all just a happy accident. “I just like writing songs,” he says, noting that the band got started when he and singer Mark started writing songs together in their Chicago apartment. “Honestly, I’m a song writer that just so happens to be in a band.”

Happy accident or not, they stick out in a good way from the hardcore bands also making their tour debut. Although I Fight Dragons also made quite the impression, bringing a ton of positive energy to the crowd with their set.

“They’re one of my favorites on the tour,” says McCarthy, indicating guitarist for the group Packy Lundholm as he walked by. “I can always tell when they’re playing onstage, because they have this adorable little guitar riff that trickles in and out... ” “Yeah, we’re the most adorable band on Warped tour,” Lundholm says, shaking his head.

Troy Harley
Troy Harley is new to Warped this year, but he’s actually one of the most experienced of the new musicians out there. He’s a star in his home country thanks to his appearance on the American Idol-style show in Russia Star Factor, which snagged him hundreds of thousands of fans.

One month later, he moved to the states and started over. “In Russia, it is very difficult, there’s nothing like the Warped Tour to help promote young bands,” Harley says. “I tried Star Factor [to get some exposure], and the producer put me in a boy band.”

Yup, Harley, a self-proclaimed rock enthusiast, was contractually obligated to a boy band for the first five years of his career. But he’s making no apologies. “When people hear boy band, they automatically think (one thing), but we were more rock,” he says. “I have no problem saying that I was in a boy band.”

Luckily, those days are long gone and he’s grinding it out, building a new fan base in America from scratch and getting them one fan at a time. Shouldn’t be a problem with his sound, which is meant to appeal to the masses.

“It’s more melodic rock... for people to understand,“ Harley says. A simple google search will make it hard to find Harley, despite his work with Randy Jackson on his new album, so only time will tell if his new and hard-won fans will make him just as popular in America. One thing’s for sure, he’s definitely got the ability and the experience to have a long musical career with his awesome brand of catchy rock.

Taking Back Sunday... and New Found Glory... and We the Kings... (The Veterans)
There’s just something about the Warped Tour that makes veteran bands show serious loyalty, returning over and over again. The tour brings crowd favorites, like Senses Fail and Mayday Parade, back for more. This year, the main stage featured vets like We The Kings, New Found Glory and Taking Back Sunday, all of
whom boast at least three runs on Warped.

So, what is it about Kevin Lyman’s baby that keeps so many established and credible bands coming back for more? “You get to play in front of a ton of people alongside a really diverse bill and you get a lot of new people in the crowd,” says TBS bassist Shaun Cooper. “Tons of people come again and again. If you didn’t win them over the first time, you have the chance to remind them continuously of what you are capable of.”

Clearly Taking Back Sunday and New Found Glory have proved themselves over and over; the hordes of people waiting an hour before their sets in the blazing sun are evidence enough.

Countless Warped veterans always rely on the old adage to describe why the Warped experience is so unique: “It’s like summer camp,” as We the Kings singer Travis Clarke says, repeating many before him.

However, Cooper’s got a different theory. “Ugh, I hate that, that’s the old cliché,” he says. “It’s cool to get to hang out with old friends, but the real comradre really comes from dealing with the same hell. It’s like,
oh man, you had to go in that port-a-potty too?!”

Of course, the day-to-day grind in the hot sun and dripping, sweaty crowds is just an added bonus. Nothing but Warped tour can bring both band and fan together to spend a day in the hot summer sun. 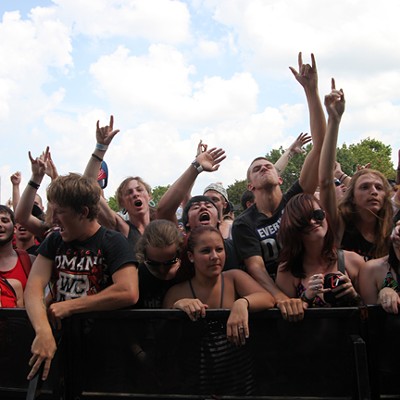