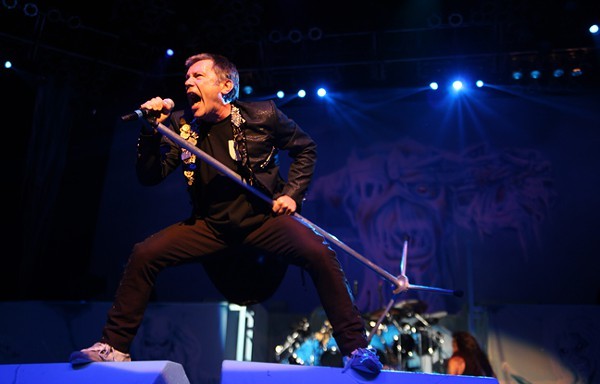 Halfway through the opening night set of Iron Maiden's 2012 tour at Charlotte's Verizon Wireless Amphitheatre, Bruce Dickinson tried to offer a bit of on-stage "magic." The 53-year-old singer aimed a finger at the stage's front right corner and a fireball shot into the air. He aimed at the front left corner and flames shot up on that side. He aimed at both corners but only one side ignited. He tried again with the right side and the left lit up. He looked offstage and... he laughed. He threw his head back in laughter and teased at the right side before swinging back left, just as a fireball ignited on the right. While some artists might be frustrated by a technical glitch, Dickinson's playful behavior was a clear indication of how much fun he and the band were having.

Perhaps Dickinson used the word "Charlotte" a few too many times. Perhaps two band members didn't need to be wearing Iron Maiden t-shirts. Perhaps the bass was a little too thick in the mix. Perhaps all of the people filling the packed amphitheater and lawn were too busy singing along to every word to even notice.

Loosely based on the band's 1988 tour, Maiden England, the 2012 stage setup and setlist were more of a tribute than a re-creation. Eight of the 15 songs from the '88 tour are on the setlist and there's a similar ice-inspired, U-shaped riser around the back of the stage, but Iron Maiden isn't on a nostalgia trip this time around. They're putting everything they've got into the music, getting the crowd involved at every chance and loving every moment of it. 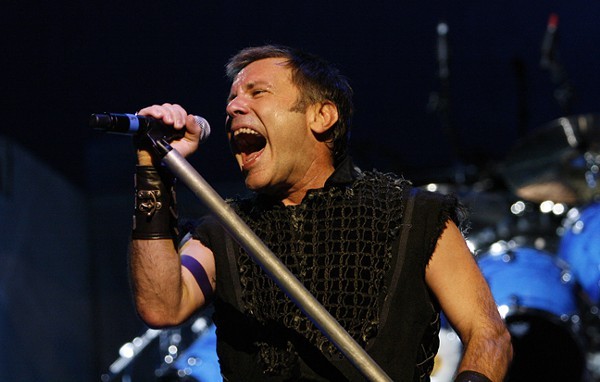 Much like the 1988 tour, the show kicked off with "Moonchild" as Dickinson stalked the riser surrounding the band. His voice in perfect shape - maybe even showing more power than heard on albums - he underwent a few costume changes through the night and made use of every inch of the ramps and stage. In constant motion, he donned a military-style coat and waved a tattered British flag during "The Trooper"; he found a trenchcoat for "Phantom of the Opera" and favored a sleeveless shirt for most of the night.

"Afraid to Shoot Strangers" and "Seventh Son of a Seventh Son" made their first live appearances since 1988 and "The Prisoner" hadn't been performed live since 1991. The only complaint might have been that "Hallowed be Thy Name" wasn't played, but with enough other favorites to make up for it, it's difficult to fathom that any fans left the show disappointed. "Run to the Hills" and "Wasted Years" got the night's biggest singalongs and numerous tunes offered theatrics to go along with them. Did it all sound a bit too "'80s metal"? Maybe - but that's how the band has always sounded. They aren't trying to update things or reinvent their wheel - they're trying to stay Iron Maiden.

A 10-foot tall Eddie (Iron Maiden's mascot) walked around the stage with a sword drawn during "Run to the Hills." Another massive Eddie rose from the back of the stage during "Iron Maiden" with flames shooting out of the top of its head. Throughout the night, the Eddie-inspired backdrops were constantly changing to go with each song - at an organ for "Phantom," with the British flag for "The Trooper," etc. - and pyrotechnics were constantly shooting off. It was a feast for the eyes and ears.

Founding member/bassist Steve Harris got nearly as much exercise as Dickinson as he was often seen running around the stage and interacting with the audience with nods and smiles.

The night ended with a three-song encore closing with "Running Free," the band's debut 1980 single. At one point Dickinson noted that he and guitarist Adrian Smith both left the band, only to rejoin in 1999. That was 13 years ago, but the first night of their 2012 tour proved Iron Maiden as a whole is back and in fine metal form.