From the moment Memphis-based, Korean-American MC Adam WarRock took the Milestone stage on May 25, it was evident this wasn't just any rap show. Meticulously crafted and spit with speed, WarRock's rhymes aren't exactly what you'd fathom when you think of hip-hop. 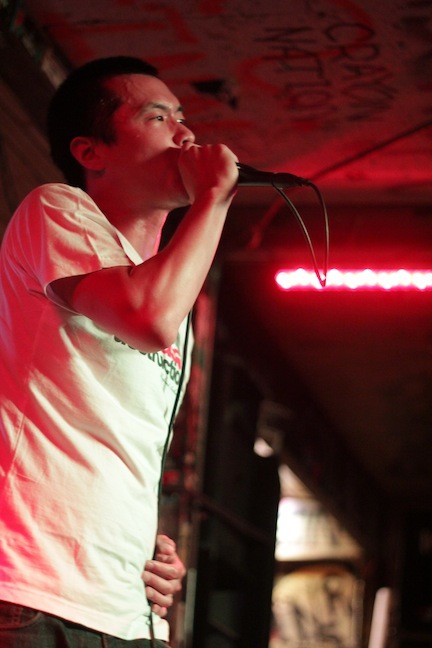 That's not to say the vibe at a nerdcore show is foreign to hip-hop. The crowd was swaggerin' and jumping to the beat. When it comes down to it, Adam WarRock's style isn't much different from any other rapper - he wants swag, ladies and a Cribs-worthy home. But the swag he craves is straight out of Marvel, the ladies he wants read comics and the mansion is built in Asgard next-door to Thor.

The only thing that screamed "nerd" was the lyrical content, occasional comic book shirts or a random dude jumping off beat. It seems as though nerdcore has created a subculture of fans from every walk of life who have blended in with each other based upon a passion for dope beats behind rhymes about subjects that got them picked on in high school.

"616" is packed with comic references, as WarRock makes himself out to be a superhero MC and highlights everything baller about Earth-616 - where everything in the Marvel universe takes place. He pokes fun, but it's apparent that he's still on the same page as the rest of the rap world. WarRock, wearing jeans and a t-shirt emblazoned with "Weapons of Mass Distraction," is as cocky as a high school jock, but his page just happens to be in a comic book instead a designer catalog.

That's not to say that comics weren't already referenced in hip-hop. Superman is mentioned in "Rapper's Delight" and Wu Tang Clan certainly had nerdy tendencies, but MCs like WarRock and ThoughtCriminals' Mikal kHill make it cool to make mixtapes exclusively about comics and TV series like Firefly.

Throughout the entire set, WarRock used the stage as a spring board and gloated while performing his new song, "A.D.A.M."; however the way he presents his swagger is quirky and laughable. WarRock is just a nerd who made it and thus has become popular in a culture that has few real-life icons. With the help of other like-minded artists like MC Frontalot and Charlotte's own ThoughtCriminals, nerdcore helps usher the trends of pop-culture into the underground hip-hop scene, creating a melting pot of fans and MCs alike.

At one point, WarRock invited Mikal kHill, who was also on the bill, to the stage to do a cocky compilation paying reference to, and titled after, the comic, Booster Gold. As the heavy rocking beat that sounded as if it was sampled from Bowser's level of Super Mario Bros. set in, raised hands began waving and the two valiant-yet-nerdy MCs delivered egotistical and encouraging lyrics spit back and forth while feeding on the crowd's response.

During songs like, "I Kill Giants," a ditty about overcoming society's judgment with obvious allusion to the comic, I Kill Giants, WarRock spread his message of unity, sending positive vibes to the eager audience. Being geeky never felt so awesome.

WarRock, calling himself "The Internet's Foremost Comic Book Rapper" and walking in the Westside Charlotte venue like he owned the place, set an example for many to follow - rappers and fans alike. His music is capable of making the uncool cool, inviting everyone to come together, regardless of societal stereotypes, to pay homage to two loves they have in common - hip-hop and pop-culture.