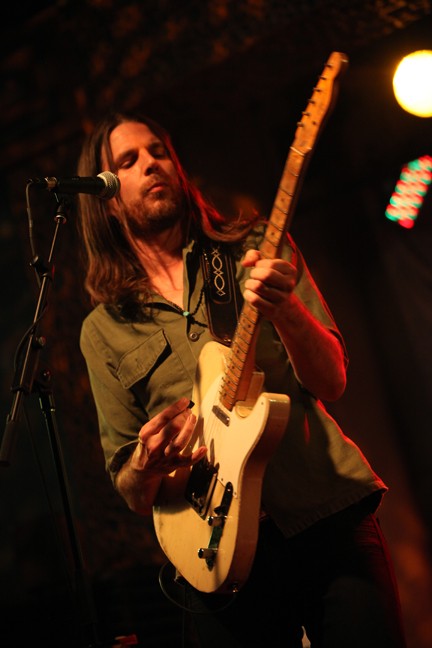 Jonathan Wilson's concert at the Visulite Theatre on Tuesday night quickly turned into a Charlotte '90s music scene homecoming. The N.C. native who began his musical career here as a teen before making his way to New York, then L.A., returned for a rare appearance that drew a good weeknight crowd of fans, friends, local musicians and family (including his parents).

These days, Wilson and his heralded CD, Gentle Spirit, are making huge waves in Britain and Europe; here he counts numerous industry heavy hitters amongst his friends and collaborators. This night, though, the focus was squarely on Wilson's own patchouli-tinged mystic rock grooves.

He and his crack band (really, you can't compliment this outfit enough, individually or collectively) opened with a grooving "The Way I Feel." Things then heated up with "Rolling Universe," Wilson's incendiary guitar workout the match to our kindling. A wonderful extended version of "Natural Rhapsody" featured Charlotte jazz scene mainstay Ziad on guest saxophone (Wilson played as a teen with Ziad, so it was a nice student-pays-back-teacher sort of moment). Other notables include "Desert Raven" and the hallucinatory "Valley of the Silver Moon."

Jenny O. opened the evening - I missed her but folks were raving, particularly about her voice.

She was followed by our own indomitable Benji Hughes, who was in immediate shirtless party mode, no doubt stoked from hanging out with Wilson, his old musical partner in the stellar ‘90s local band Muscadine.

We got strong versions of "Vibe So Hot," "All You've Got to Do is Fall In Love with Me," and "I Went with Some Friends to See the Flaming Lips," with its line - "Charlotte people on tour" - drawing the usual
big applause at this hometown gig. And it was a fitting reference, as Wilson and his band are soon heading to Europe to open for Tom Petty and the Heartbreakers.