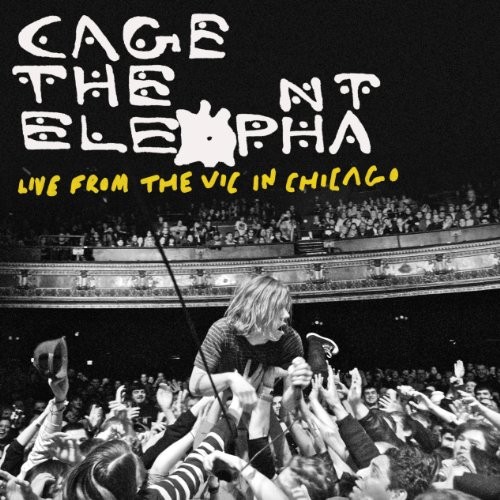 Cage the Elephant
Live from the Vic in Chicago
RCA; Release date: Jan. 3, 2012

"Ain't No Rest for the Wicked" was just starting to swarm the airwaves in 2009 when Cage the Elephant played an early Sunday set at Bonnaroo in Manchester, Tenn. It was the first set I caught that day — I remember standing in the photo pit, photographer Danny Clinch standing next to me with a grin on his face, as singer Matthew Shultz and his red spandex body suit screamed, danced and bounced around the stage. It was the most energetic and intense live show I saw that weekend.

Fast forward to February of 2010 when Cage the Elephant made its Charlotte debut with a sold-out concert at Amos' Southend. Shultz again was the focus of attention as he ended the show hovering above the crowd, surfing while singing.

While the band's two studio efforts — 2008's self-titled debut and 2011's Thank You, Happy Birthday —Â aren't exactly polished, it's the band's live shows that truly show its strength and raw qualities. Finally capturing that potency is the new CD/DVD release, Live from the Vic in Chicago.

The album catapults the listener into the 19-song set with "In One Ear." Shultz's voice is shaky at times, but it's usually due to his incessant behavior on stage. The DVD gives a great idea of how frantic the entire band appears in concert. Shultz wastes little time propelling himself into the crowd, later letting the crowd know he enjoys crowd surfing so he can spend time with fans.

The set includes all but one of the songs from Thank You and most of the band's debut. The group's vivacity never wanes as they roll through song after song, the crowd singing along, sweat dripping from every forehead in sight. Cage's blues-rock style comes through crisply — the quality of live albums has definitely increased over the years. The audience comes through clearly, too, without overwhelming the band's vocals.

The band's two-song encore is included — a cover of Talking Heads' "Psycho Killer" and Shultz's solo performance of "Shiver." The cover is done in Cage's style rather than trying for a note-by-note copy of the original. A live CD and/or DVD should truly capture the live essence of a group and this collection does it perfectly. The sound quality is clear while the DVD visuals are borderline inspirational in their ability to get feet moving or heads bobbing.

The only bad note is the fact Cage has only been to Charlotte once and that was nearly two years ago. Hopefully, they'll be back through soon...