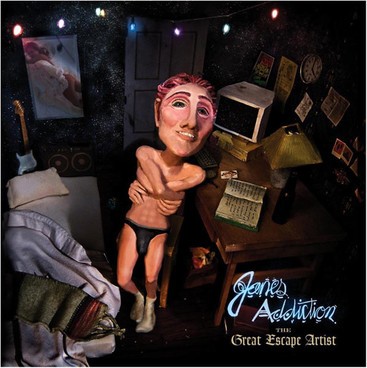 Finally releasing their fourth studio album, Jane's Addiction hasn't been the most prolific band in the last few decades. It seems like they've spent more time changing up bass players than writing songs. The Great Escape Artist comes on the heels of 2008's reunion with the band's original lineup.

Bassist Eric Avery didn't last long once the band hit the studio, however. He was replaced by former Guns N Roses bassist Duff McKagan for six months before TV on the Radio's Dave Sitek finally took the job for the album's duration. (The current touring lineup features Chris Chaney.)

The result is an album of contemporary alt-rock showing the increasing maturity of the quartet. Gone is the drug-fueled spirit of the band, replaced by a smarter brand of musicianship.

Perry Farrell doesn't quite have the barbaric yawp that he did on the early Jane's efforts. He's more focused on singing and tone these days than he is on shouting out a war call about "coming down the mountain."

"Underground" starts off the album with the energy fans have come to expect — echoed vocal choruses, vibrant guitar fills by Dave Navarro and tribal drums from Stephen Perkins. Sitek does a good job driving the songs forward via a rumbling bass riff. Much like "Three Days" provided the listener with a journey more than a repetitive verse-chorus-verse structure, most of the songs on Escape do the same thing — in half the time.

With most songs clocking in at under four-and-a-half minutes, the band sometimes sounds like they're in a hurry to get it over with. Could the studio sessions have really been that bad or are they simply saying all they'd like to say?

"End to the Lies" gets a nice, slow 30-second intro before rolling into the lyrics and meat of the song. Before you know it, Navarro is cruising through a brief solo and the song is over three minutes later. It happens again on "Irresistible Force" — Farrell talks over a Tool-like pinging of guitars and sticks-and-stones drum beat before the chorus hits and it's over... in four minutes. It's as if we're hearing the television edits and you still have to wait for the unedited version to be released.

"Twisted Tales," "Broken People" and "I'll Hit You Back" are based more around chords instead of a lightning-in-a-bottle guitar riff or thematic call in the lyrics. They almost sound like Jane's performing songs by other bands instead of forging new creative territory. What does remain intact is the tone of the band's music and Farrell's voice.

Now in their 40s and 50s, the band couldn't possibly be expected to continue that youthful energy of Nothing's Shocking or Ritual de lo Habitual, but at the same time Escape just feels rushed. One also has to wonder how many of them will be performed live and how many will be left in the archives next to 2003's Strays.

Escape cruises through 10 songs in just under 40 minutes leaving listeners hoping that it won't take as long for another studio effort to materialize.