The Deal: Folk singer Dar Williams is joined by two-thirds of Nickel Creek for Monday night show at the McGlohon Theatre. 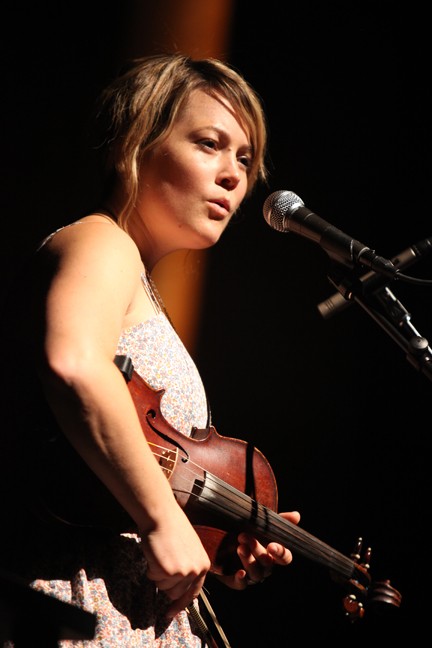 The Good: The night started out strongly with a 40-minute set from Sara Watkins, formerly of Nickel Creek, who was joined by her brother, Sean, for the duration. Like her album, Watkins' set was a mix of originals and covers, each of which showcased her vocal range and fiddle skills. The smooth sound of her voice radiated perfectly in the seats of the Theatre, at times giving a hint of childlike innocence about them which made her vocals easy on the ears. Occasional foot stomping and the finger-picking of Sean made for a stripped down, sit-back-and-take-it-easy performance. Among the songs played were Morrissey's "The More You Ignore Me," "Pony," "All This Time," "Too Much" and "Long Hot Summer Days," which garnered decent audience participation.

Dar Wiliams took the stage a short while later, with keyboardist in tow, and performed a good mix of rare and favorite tunes for her hour-and-15-minute set. The 43-year-old singer showed a youthful energy and shared tales of her days starting out as she often spent time between songs to offer short stories, also telling stories about the death of Kurt Cobain, living in New York and the Northeast and recalling the last time she was in Charlotte. She performed two songs, "Ocean" and "What Do You Hear" acoustically solo — the second song was one that was retired, but often requested, so she has brought it back into her performances.

She was joined by Watkins for two songs — the duo offered great harmonies and balance during "Green Pastures." Her setlist had "Iowa" with Sara and Sean Watkins, but instead, Williams performed "The One Who Knows" by herself. An encore of "Mercy of the Fallen" was replaced by "Book of Love."

The Bad: There was nothing wrong with Williams, but at the same time, I can see why there wasn't a sold out show in a larger venue. I got the feeling that her style has remained generally the same — simple, well-written folk songs with solid vocals — over the years. Her coffeehouse style has been brought to the big stage which is more familiar than refreshing. I walked away thinking, "That was good" instead of "That was amazing" or "I need to bring friends next time."

The Verdict: For me, Watkins outshined Williams on the musical and lyrical fronts. Her voice had more range and her music was more relaxed, like you were sitting on a back porch watching a brother and sister have fun playing songs together. Perhaps it was also more of a youthful appeal for Watkins given the demographic of those in the audience and the adult contemporary style of Williams.

If I Wrote You

Are You Out There

Beauty in the Rain

What Do You Hear

It's Alright (with Sara Watkins)

The One Who Knows