The Deal: Triangle-area band Annuals visits Charlotte for the second time; brings along

The Good: Arizona's What Laura Says was already on stage when I walked into the Visulite last Friday. They reminded me a bit of Kings of Leon mixed with some early Floyd. It didn't matter that the crowd was still small at that point, because the guys were giving it everything they had. While I wasn't quite impressed at first, they did start to grow on me after a song or two. I also thought it was interesting that they had one band member handling "percussion" in the form of an array of bottles being hit with sticks. 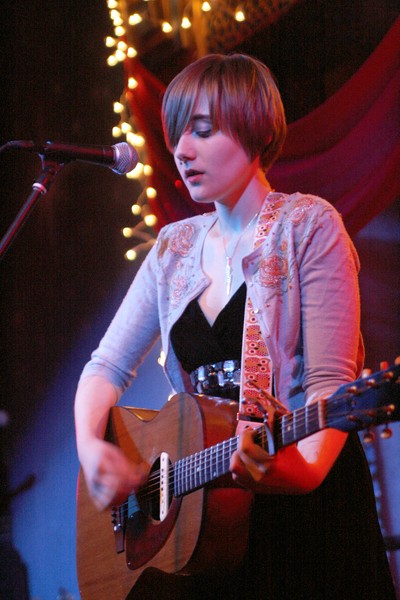 Jessica Lea Mayfield was next up and I could instantly hear why The Black Keys brought her along on their last tour. Having a drummer and guitarist with her helped electrify and give her more of a raw edge instead of something so folksy.

Annuals came out with an in-the-dark drum intro as the drum heads lit up each time they were struck. The band had a somewhat static sound, though they did change it up from time to time. (See The Bad for more info on that.) The band had a solid following up front that was singing along to every word and feeding off of every energetic note. Dual drummers pounded away as singer Adam Baker drew them in with his vocals.

The Bad: There were moments when Mayfield's guitarist was overbearing and you couldn't hear a word that was sung. As for Annuals, I kept felt myself thinking, "Didn't I just hear this song?" A lot of the band's tunes were sounding similar to me as singer Adam Baker continued to scream out each chorus in the same tone.

The Verdict: All three acts have the potential to go on to bigger and better things.