By Brittney Cason and Jeff Hahne 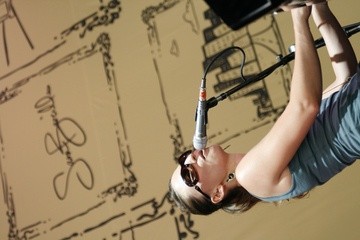 The Deal — Another summer concert at Verizon Wireless Amphitheater — Home of the $11 beer. This one was Sara Bareilles, Maroon 5 and Counting Crows.... and Counting Crow's lead singer Adam Duritz's cane.

The Good — Sara Bareilles! She might have one of the best voices I have ever heard live. Maroon 5 did teasers to intro each song. Adam Levine sang Chris Issac's “I Wanna Fall in Love,” to fade into “She Will be Loved,” and Oasis' “Don't Go Away,” to fade into “Sweetest Good-bye.”

Duritz didn't let an injured foot hobble him as he still found time to leap and dance around the stage. The pairing worked out well, and it wasn't the first time they shared the stage. Bareilles has opened for Maroon 5 on previous tours. "We have also known each other a long time because we toured together years ago and we like each others bands," Duritz said during a recent press conference. "We haven’t seen much of each other the last few years but we like each other’s music, which is a good thing because when you’re on tour all summer it’s nice to be able to see some music you like and hear some music you like."

The Bad — The song sets were rather disappointing; the Counting Crows didn't play many of their old songs, and Maroon 5 didn't sing either of my favorite songs by them: “Better that we Break” or “Nothing Lasts Forever” — those songs are like therapy for me. "We never make our set lists up, well, almost never, until the day of the show, and they change every day," Duritz said. It's as though Adam Levine is going through the exact same thing I am, and although he didn't sing it at the concert, he said it: “Ladies, if not for you we'd have nothing to write about — so thanks for screwing up our lives”

The Verdict Adam Duritz really is the “Rain King” — as soon as he performed it, a thunderstorm rolled in. And even though it was a dual headlining tour and someone inevitably had to go first, I was surprised Maroon 5 went on before Counting Crows because it's still as though they opened for them. A number of people left after Maroon 5's set.

On Almost Any Sunday