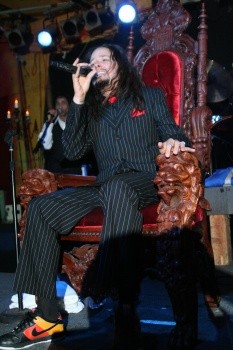 The Deal: Korn frontman brings first ever solo tour to the Q.C.

The Good: A collection of obscure songs and a few covers made up the hour-and-a-half set by Korn's Jonathan Davis. Spending most of the night seated in a large wooden throne, the black-suit-wearing Davis writhed and rocked his way through 20 songs. Fans sang along throughout the night and pumped fists in the air, while Davis could often be seen smiling and simply having a great time. With stand-up bass, violin, guitar and drums, the music had a more primal sound which made for a fitting backdrop to Davis' haunting lyrics. Covers for the night includeda slow, grooving "Blue Monday" and "Love on the Rocks," as Davis noted, "This is a song by Neil Diamond, who I think is a pimp." He also sang "Careless" from the Queen of the Damned soundtrack, noting it was his favorite track written for the film.

The Bad: The dark mood lighting was often interrupted by the constant wave of camera flashes going on from the crowd. Davis all but about one minute of the night seated, which left some in the back with no view at all.

The Verdict: For die-hards, it was a great chance to hear songs that aren't often played - if ever - and an up close event with Korn's charismatic frontman. For casual fans, only a few singles were played and they were probably left wanting more. 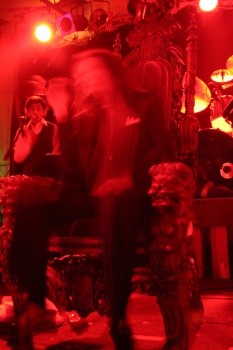 Love on the Rocks

Not Meant for Me

Falling Away From Me