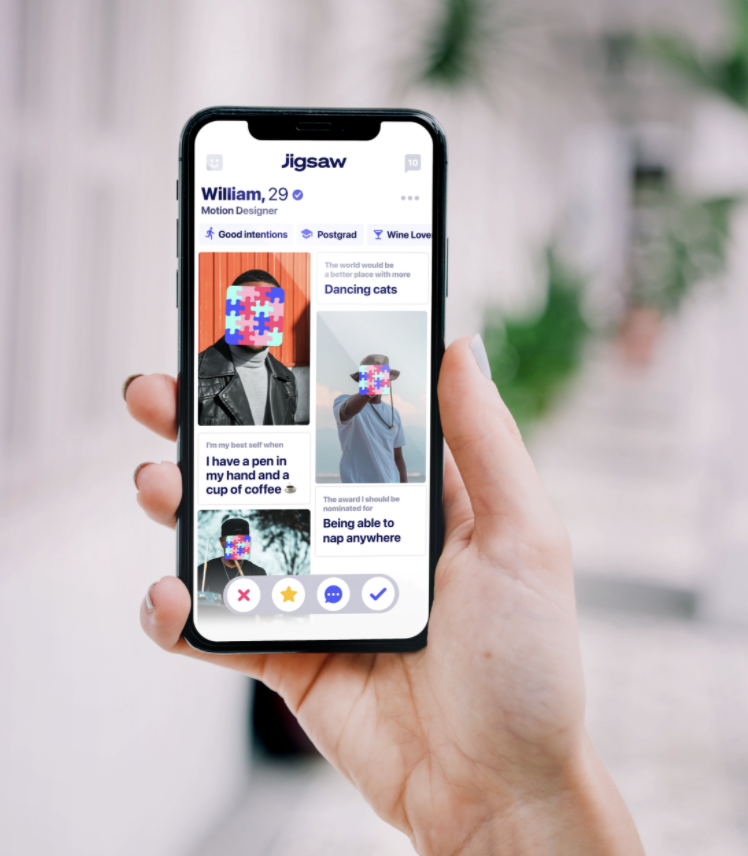 WHAT: Jigsaw, the dating app that empowers people to put their personality first and be their true selves, has launched in Charlotte, NC tapping into nationwide consumer dissatisfaction with shallow dating app culture. Jigsaw is the only dating app that both, covers peoples’ faces and calls out the harmful nature of the way dating apps make people feel, and it’s on a  mission to save singles from superficial dating.


WHERE: Now launching in Charlotte after a noteworthy New York debut in November 2020, which amassed a community of over 10,000 singles in less than one month. The company has goals to attract and empower 100,000 singles to date differently by March 2021.


HOW IT’S DIFFERENT:  Jigsaw is committed to providing a platform for people who want dating with character and conversation. This is evident in a number of distinctive features it has built into the platform:

Jigsaw is a dating app for people who want dating with character and conversation, not fakes and filters. It has one clear mission: to save singles from superficial dating. Jigsaw was founded in Leeds, England, in 2016, by Alex Durrant (CEO) and Max Adamski (Chief Product Officer) and has since become one of the fastest growing dating apps in the UK. Since inception, the company has raised over $4.7m in funding.

The app is committed to helping users match based on personality over looks. Its USP is a digital puzzle piece that is overlaid on users’ faces and disappears the more users send messages to each other. Other notable features include the banning of selfies and filters and the app does not request any physical information (height, body shape and ethnicity). The revolutionary dating app launched into the United States, in New York City, October 2020, followed by 20 other metropolitan cities before the end of the year.