Political rabble-rouser, arts and music writer to be remembered this weekend

Jerry Klein, the author of an estimated half-a-million words worth of Creative Loafing columns, news features and cover stories, lost his battle with esophageal cancer early this morning. He died peacefully, according to loved ones. 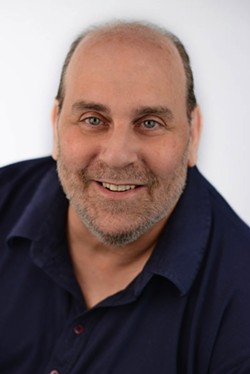 A Creative Loafing contributor between 1987 and 2001, Klein tackled the city's toughest issues, lifting the rug to expose the dirt below and the folks who swept it there. He was also a passionate patron of the arts and a fervent music fan, and it showed in his inspired coverage of Charlotte's cultural scene. It is believed he wrote 365 columns for CL during his first decade with the paper.

Klein returned to the paper in 2014 as a contributor, writing a cover story on the struggle to find funding for arts in Charlotte and contributing columns and news stories on the I-77 toll lanes, Thom Tillis, the Michael Brown shooting and much more. You can see his archives here.

A celebration of Klein's life will take place on Saturday, August 18, at the Great Aunt Stella Center, where Klein was Director of Programming from 1988 to 2001, at 926 Elizabeth Ave. at 3 p.m. Organizers ask that attendees wear bright colors in honor of Klein's colorful life. His loved ones also ask that any donations made in Klein's honor be made to DrumsForCures, a local DRUMSTONG program that holds events to raise awareness and funds in support of cancer survivorship, education, prevention and research through uplifting, facilitated and interactive rhythm experiences.

John Grooms, CL's longest-serving editor, worked with Klein for most of his years at the paper. Grooms was saddened to hear of Klein's passing on Friday and offered the following statement: "Jerry was an important part of Charlotte’s cultural growth during the late 1980s and ‘90s, expanding both the limits of political discourse on talk radio and the range of live music available in the city’s venues. He was a big part of Creative Loafing’s growing popularity during that era and it was a personal as well as a professional pleasure being able to coordinate and shape coverage of important issues with Jerry. He was a fiery, passionate man with a strong sense of humor and the absurd, and a 'Damn the torpedoes' attitude that caused some to oppose his efforts, but which we at CL found to be right up our alley. He is already missed."

Born in Philadelphia, Klein moved to Charlotte at 3 years old. In the '90s, he was a talk show host on WBT-AM, where he railed against many of the same injustices he covered in the pages of Creative Loafing. In 2015, Klein wrote a column, titled "The Night They Missed," recalling the time someone shot at him while he got out of his car at the WBT studios one night.

In the early aughts, Klein moved to Washington, D.C., and married his high-school sweetheart. He found a job with WMAL, serving as the token liberal at a station known for giving Rush Limbaugh his platform. Klein made headlines in 2006 when, during his WMAL show, he sardonically called for all Muslims to be rounded up and marked with an identifying tattoo. Near the end of the program, he proclaimed that his remarks were a hoax, then went on a rant indicting the many callers who had phoned in to agree with him, comparing them to those living in Nazi Germany. It was an experiment that today could be called trolling at its best.

Creative Loafing mourns the loss of Jerry Klein. In our 31 years, there has never been, nor will there be, a talent quite like his.