Videos give glimpse into troubled psychological background of victim 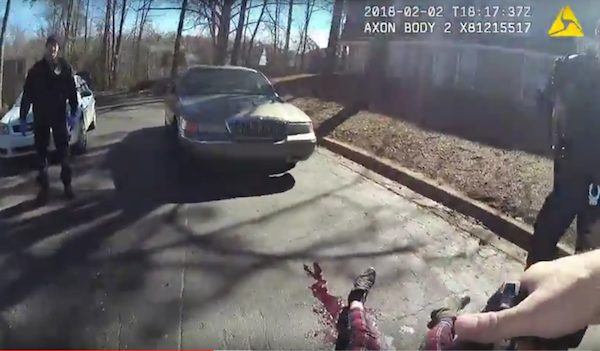 The videos, which have been posted to the city of Charlotte's website and YouTube, include footage from the officer who fired on Shoupe and three other officers on the scene that day, as well as two officers who went to Shoupe's home on Timberbrook Drive the previous day.

According to CMPD, officers were called to Shoupe's home 11 times in the year leading up to his shooting. Footage from February 1 gives a glimpse into a troubled home life and Shoupe's concerns with the medication he was taking, including Haldol, which is used to treat various mental disorders.

Officers arrived to Shoupe's home and spoke with both Shoupe and his mother. His mother told officers she was concerned that he had smoked marijuana the previous day with his brother and had not taken his medication. She said that Shoupe was a diagnosed schizophrenic and that it ran in her family.

For his part, Shoupe told police that he believed his schizophrenia was a misdiagnosis and he only suffered from a form of autism. He remained calm throughout the time officers were at his home. He told officers he believed he could read people's minds with "thought machines," and that he didn't feel the need to take his medicine anymore.

"I know what's right for me. I don't want to take any medicine because it makes me feel even worse than I did before," Shoupe tells Officer Ignaczak in the footage. "I'm trying to see if I can develop happiness again because that medicine decreases dopamine and makes me feel just dull. Like, somebody could say a joke and I wouldn't even laugh."

Shoupe refused to be transported to a hospital to see a doctor, and his mother later allowed him back in the apartment and told officers they could go. The next day, he was shot and killed by Officer Daniel Flynn after running toward him with a knife in the parking lot of the same apartment.

Footage from Flynn's body camera shows him arrive on the scene, where Shoupe can be seen running toward his car with a knife held above his shoulder in a stabbing position. Flynn exits his vehicle and orders Shoupe to get on the ground, but Shoupe runs in his direction. Eight seconds later, with the view of the body camera obstructed, Flynn fires nine shots.

Footage from other officers on the scene show efforts to save Shoupe, while others work to preserve the crime scene and gather contact information from witnesses.