Ruben Galindo was killed on September 6 after calling 911 and telling dispatchers that he had a gun without any bullets in it. CMPD released body cam footage of the shooting on Friday, which showed that Galindo was holding his arms in the air when he was killed.

Hector Vaca with ActionNC spoke at tonight's press conference, stating that Galindo called police to turn in the gun and followed officers' directions when they arrived.

"We need for CMPD to take responsibility for the actions of their officers," Vaca said.

Vaca demanded that the Charlotte-Mecklenburg District Attorney's office press charges against CMPD officers Courtney Suggs and David Guerra, who both fired their weapons at Galindo. 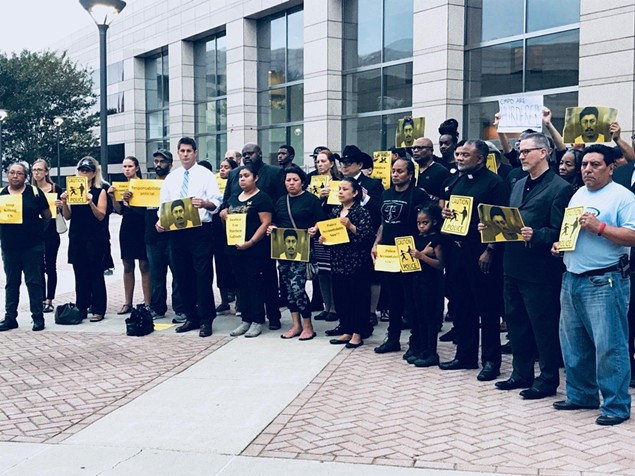 Attorney Brian Hochman also spoke at the press conference. He pointed out that Galindo watched after his four-month-old daughter, Ruby, and five other children who lived with him.

"On September 6, [Galindo] called police for help, and the end result of that call is that he was killed," Hochman said. "On behalf of his family and his loved ones, we are encouraging a complete and thorough investigation, and we have already met with the district attorney's office, who has ensured us that that will occur."

Hochman said he and the family are willing to allow the investigation to run its course, but that they participated in the press conference because of the efforts of others to "get out in front of the story." He encouraged the CMPD to be fully cooperative with the upcoming investigation.

"The videos speak for themselves," Hochman said. "This is horrific. No person, no parent, no spouse should ever have to see what this family has seen."

The CMPD announced this morning that officers will be holding a use of force exercise for reporters to participate in on Wednesday morning to help "provide critical insight to [the] community on the important, yet often misunderstood subject involving police use of force," according to an email. Stay tuned to Creative Loafing for more coverage.