April 29, 2016
comment
Papa Roberto dabbles in magic, to the delight of his kids, Tito and Milagro. His most treasured father-and-son moments are spent building and flying kites – until Papa goes off to work and never returns. How Tito reacts to his dad’s sudden deportation to Mexico is the heart of The Magic Kite, now in its world premiere production at ImaginOn. Children’s Theatre of Charlotte commissioned the new work by José Cruz González because artistic director Adam Burke was moved by artist-activist Rosalia Torres-Weiner’s paintings and her Papalote Project here in town. (Read more about Torres-Weiner here.) 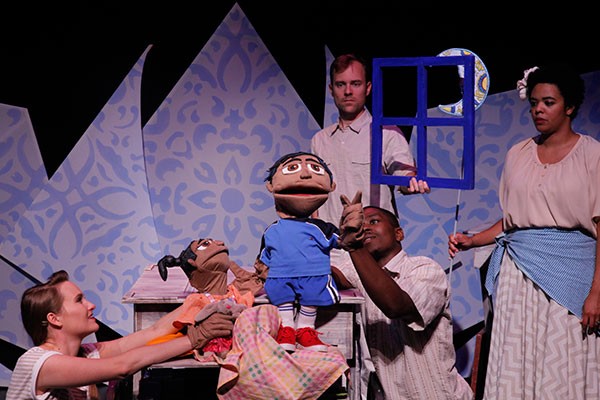 At the same time that this project gives children of deported parents the opportunity to vent some of their anguish through artistic expression, classmates, teachers and parents become more aware that families fractured by deportation are living right here in Charlotte. Staging this new play at  ImaginOn's Wells Fargo Playhouse is a great way to extend that worthy mission to an even wider audience.

González, whose adaptation of Tomás and the Library Lady was staged at the same venue five years ago, seems a bit rushed here when establishing the kite and magic strands of his plot at the beginning and when he ties them together at the end. There’s plenty going on in just over 45 minutes as Burke directs the four members of the Children’s Theatre Resident Touring Company, since each of the performers communicates with us through at least one puppet – and a few sprinklings of Spanish.

Although Mark Sutton’s puppet designs have a nice folksy quality to them, narrowing our attention is a bit challenging with Torres-Weiner’s paintings flanking the stage while we jump back and forth from the magic scenes to the kite scenes. Scott Miller presides over these early scenes warmly and authoritatively as Papa with officious, worried support from Veda Covington as Mama Esperanza. It turns out that it’s really important for Roberto to get his taillight fixed.

When Papa gets picked up and deported, the weight of the story falls upon Tito, and Rahsheem Shabazz moved me in making Tito’s transition from awestruck child to the little man of the house. Leslie Ann Giles seems shortchanged at first, drawing the role of littler Milagro, but she soon gets her hands on a couple of other puppets. The most significant of these is Tito’s school chum Jamal, aggrieved by the loss of his mother, but Giles also gets the choicest cameo as the pet cat.

As often happens in children’s literature, wounds and losses that two kids have in common help in bridging their differences and cementing their friendship. González poignantly employs magical realism when Tito takes his family skyward on his kite, journeying to Mexico where they can be reunited with Papa. But an invisible barrier prevents them from crossing the border, so Tito and his family can see his beloved Papa, but they cannot join him.

At such fantastical moments, puppets can facilitate wonders. It’s just the aftermath that González bungles, loosening his grip on the tiller as we sail toward a consoling affirmation. I’m reminded of my teaching days, when I’d notice the class bell sneaking up on me. I’d rush through – or even skip over – the crucial ending of my lesson to assign the homework before the students rushed out.

Pretty much the same thing happens here as González tells us that more kites fly upwards after Tito’s sadly lands. We just don’t get a satisfying account of how that happens or what it means. The Magic Kite could easily unfold all its potential magic if González could add 10-15 minutes to it. Meanwhile, it was very useful to have Torres-Weiner hanging around after last Sunday’s matinee to answer kids’ questions in the talkback. They asked some really good ones.