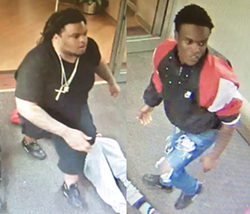 A man wanted for the March 31 murder of Ernest Cash, Jr. is in police custody. Police said 22-year-old Antonio Covington turned himself in at police headquarters on Sunday. Covington is believed to be the one pictured dropping Cash off at Carolinas Medical Center in south Charlotte following the shooting. Covington has been charged with murder and possession of a firearm by a felon. The other man believed to be in the photos, Shari Harris, was found and interviewed by police. He was not charged in the murder. (Ryan Pitkin)

One person has reportedly been shot in an armed robbery at a pawn shop in Gastonia this morning. The victim was grazed by a bullet during the robbery, which took place at Quick-Cash Pawn Shop at about 9:30 a.m. this morning. (WBTV Web Staff)

State troopers say a man who was hospitalized after spinning out and slamming into a Department of Transportation truck on I-77 overnight was going about 110 miles per hour when the wreck happened. The incident occurred at about 2:30 a.m. in the northbound lanes near West Boulevard.  Nobody else was injured in the wreck, as DOT crews were still working outside of their vehicles. (WSOC Staff)

PHOTOS after driver accused of speeding more than 110mph crashes into DOT truck on I-77 https://t.co/cALu4qhFz9 pic.twitter.com/w8bkleOCiz


A 12-year-old is said to be recovering after being shot in the leg during a home invasion this weekend. The girl was reportedly shot by suspects who kicked in the door at her family's home on Saturday night. Nothing was stolen in the incident. Police are yet to release any information on the suspects. (Fox46 Staff)