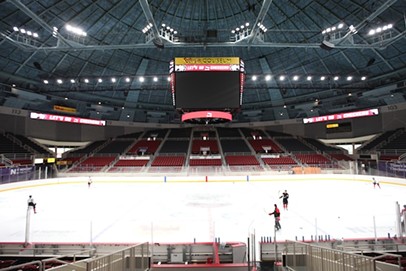 The first phase of a $16 million renovation to Bojangles' Coliseum was presented to media and city leaders today, as Charlotte city council member Vi Lyles – fresh off an election night win on Tuesday – joined Charlotte Regional Visitors Authority representatives, investors and Chubby Checker to cut the ribbon in the newly built Red line Club within the coliseum.

About $4 million of the first-phase upgrades were hockey-related, as the Charlotte Checkers will be returning to their former home after a decade playing in Time Warner Cable Arena. The "Checkers Come Home" this Saturday, Nov. 7, at 7:30 p.m.

Here are a few upgrades fans will enjoy on opening night and the 37 home games following that:


— The new scoreboard is the first thing that hits your eyes as you enter the rink. The center-hung board features that red and yellow Bojangles' sign so familiar to Charlotteans, but also includes four main video displays measuring 12.5 by 22 feet, four auxiliary displays and a ring display. Fans will also notice ribbon displays in each corner of the coliseum measuring four feet high by 59 feet long.

— Seating will be the most noticeable change for fans. Wider, more comfortable seats were added during renovations, bringing the total number of available seats from 9,200 to 8,600. The former folding seats in the coliseum were approximately 16 to 18 inches wide, but America's gotten fatter. Skinny fans will also breathe easier in the new 18-to-21-inch-wide seats. The city distributed original double- and triple-seat sets in August to the lucky fans who won the chance to buy them after they were removed form the coliseum. More than 2,900 people had signed up to purchase the 437 available pieces of Charlotte history.

— The renovation crews worked to retain a vintage feel in the mid-20th century building. Concession stands – anchored by Queen City Q, Newk's Eatery and, of course, Bojangles' – use aluminum siding and neon lighting to give that diner-like feel to customers. A Hammond B2 organ, original to the venue, will play to the crowd as the Zamboni makes its rounds during intermission. Other new refreshment options include Kelly's East Side Diner, The Local Tap and the above-mentioned Red Line Club, which sits between the ice and the locker rooms, with players cutting through during intermission.

— The second phase of renovations will focus on infrastructure updates, such as storm drainage, electrical work and additional storage. However, the integrity of the building remains historical, as the tin dome roof – the country's largest unsupported steel dome at the time of the coliseum's opening – has remained through its 60-year existence. More relics have surface, as well, during renovations. Crews said they came across old concession signage while completing their work, including signs advertising 15-cent colas, 15-cent aspirins and even 15-cent cigars. No word yet on whether the Checkers will hold a throw-back night during which fans are allowed to smoke in the building.

Below, a slideshow of photos from today's ribbon-cutting and Checkers practice taken by Jeff Hahne.