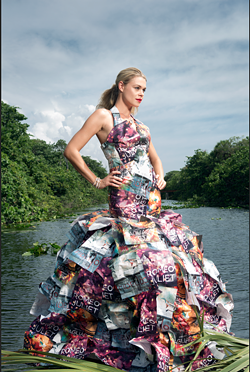 Ludwig van Beethoven's Fidelio launches Opera Carolina's 2015-16 season this Saturday with a little glamour on the red carpet. But there's a twist: A dress made out of trash is one of the stars.

The dress, from design company Garbage Gone Glam, was designed by Kristen Alyce, the company's CEO. It will be on display beginning at 6:30 p.m. on Oct. 17, the season's opening night, and will remain on display throughout the season. The work of art was commissioned by Opera Carolina.

Alyce said she got into making dresses out of garbage after working with other designers during New York Fashion Week. A former K-12 teacher based in Florida, she said her time behind the runway taught her "that some of (the clothes) were just for statement and that they wouldn’t always be worn on the streets – they were just about art."

At the same time she was frustrated with the huge amount of trash generated in our society. "We waste so much stuff," she said, "and I just couldn’t take it anymore. I wanted to show people that they could be reusing many things before they end up in a landfill," she said.

So she began collecting magazines and plastic bags and tissue … “anything I can reuse.” Over time, she produced an entire line of recycled fashion, and then Porche commissioned her for a "massive event, and things really took off from there," she said.

For Opera Carolina, she made a dress entirely of show posters. “They are beautifully designed posters," she said. “The opera gave me free reign, which is really amazing. I wanted to capture an opera feel with the fashion … and give it some extra oompf, because the opera is just that – it’s a higher level of entertainment.”

Megan Miller, director of marketing for Opera Carolina, said that when he began in her position with the opera some months ago she was handed a huge stack of last year’s promo materials to dispose of and thought, "Oh my goodness, this is a lot of paper that we are going to waste.” While trying to decide what to do with all of that paper and also seeking "an out-of-the box way to market the new season" she thought of her college friend, Alyce, and described to her the desire to both "bring the magic of the red carpet back to Opera Carolina" and launch a recycling initiative.

The eco-dress may not be the last for the opera. “Our goal is to reach out to fashion schools in Charlotte to see if they want to do something similar," Miller said.

Alyce will attend opening night. She is currently working on a coffee table book due out next year that will depict sustainable Disney princesses.