Before the curtain rose for CPCC Summer Theatre’s opening night - and its 42nd season - artistic director Tom Hollis observed a protracted moment of silence from the Halton Theater stage for sound designer Jeff Murdock, who died suddenly earlier this spring. 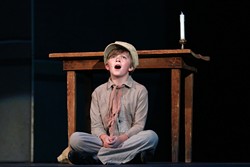 Frequently plagued with thumping noises, sudden squeals, and awkward sonic dropouts ever since the Halton opened nearly 10 years ago, the sound system was incorrigible last Friday during performances of Oliver!. Sound designer Kenny Shouse, presumably manning the soundboard as Murdock had done before him, seemed to have all his lines potted to prudent levels. I’m not sure I heard a single one of those unnerving squeals all evening. But there were more abysmal dropouts than I can ever recall at CPCC, and those prudent levels usually meant that our soloists couldn’t be heard when musical director Drina Keen summoned fortissimos from the orchestra pit.

Hollis could not be faulted if he felt that the splendid work by Keen, choreographer Ron Chisholm, set and lighting designer Gary Sivak, and costume designer Jamey Varnadore was heartbreakingly defaced by the wayward sound. I felt more sympathy for Hollis, for in assembling this Oliver! design team and cast, then coordinating them so well — including nearly two dozen children. Hollis was as masterful as he’s ever been in his 32 years at CPCC.

Seventh grader Bennett Harris brings just the right combination of frailty, appeal, and pure singing voice that we hope to see in Oliver Twist during his early days at the workhouse. Passed along to a funeral home and Fagin’s notorious band of child thieves — now open to pickpockets of both genders — Harris remains innocent, pitiful, yet plucky. So when by a stroke of unbelievable Dickensian luck, Oliver lands in the home of a wealthy man who just happens to be a close relative, he seems very much at home. 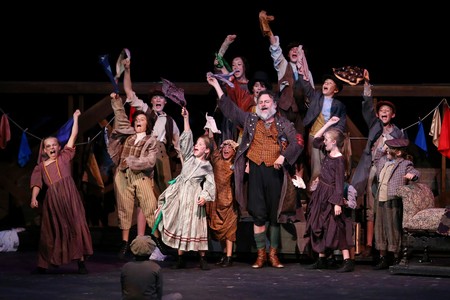 Oliver’s tormentors are an interesting lot, beginning with Craig Estep as Mr. Bumble, the tyrannical, conniving beadle of the workhouse. More benign are the undertakers, Jerrell Medley and Paula Baldwin as Mr. and Mrs. Sowerberry, though the orphan doesn’t stick around long. Oliver’s most flavorful custodians are among the most crooked, Thomas Young as pickpocket prodigy The Artful Dodger and Rob Addison as mastermind Fagin, both considerably softened in Lionel Bart’s adaptation of Dickens’ 1837 novel.

Not the oldest Fagin you’ll ever see, Addison may be insufficiently small, crabbed, or weasel-y as the renegade to some people’s tastes. But he is a crafty devil, best in “Pick a Pocket or Two” and “Reviewing the Situation,” just barely able to cross over into the realm of juvenility for “Be Back Soon.” Addison is the only vocalist that we consistently hear over the orchestra, a good thing since it’s a caricature of Fagin, poaching from the title, that actually forms the logo of the original 1960 musical — with the O and the v as his eyes surrounding his drooping L nose.

Tommy Foster as Bill Sykes and Corinne Littlefield as Nancy don’t soar over the orchestra as consistently, but they powerfully deliver a rich account of their abusive, dysfunctional relationship. Foster growls his vocals, heightening the melodrama at the expense of audibility, and if Littlefield doesn’t offer the most gut-wrenching “As Long as He Needs Me” that you’ll ever hear, her wanton and zesty “Oom-Pah-Pah” in the beer hall makes it seem possible that she would actually take on a boyfriend as brutish as Bill.

Some of the most unfettered moments of this production occur when a mass of voices and Chisolhm’s choreography can veil the vagaries of the body mics. These dancing ensembles are nicely spaced, “Food, Glorious Food” opening the show, “Consider Yourself” in Scene 5, and the ethereal “Who Will Buy?” in Act 2, Scene 2, where Sivak’s set and Varnadore’s whirling costumes really do seem to wrap the whole spectacle in a colorful ribbon.

As we filed out of the Halton, I overheard one woman — perhaps a grandmother of one of the workhouse orphans — telling someone, “It was a very good performance. I just wish the sound wasn’t so bad.” That’s a nice summation, but with considerable understatement in both sentences.