(Ratings are on a four-star scale.)

Jurassic Park - 1993 was an exceptional year for Steven Spielberg, scoring critical and commercial kudos with both his summer blockbuster Jurassic Park and his year-end awards contender Schindler's List. The hype surrounding the dinosaur film was deafening, and yet the movie largely managed to meet expectations. Based on Michael Crichton's bestseller, it centers on the efforts of various characters — including scientists charismatically played by Sam Neill, Laura Dern and Jeff Goldblum — to escape from a theme-park island that's crawling with genetically recreated dinosaurs. Spielberg treats us much as he does his characters, leading us into a strange land and then expecting us to make it out with all our faculties intact; it's a tall order, given the heart-stopping, blood-curdling, limbs-numbing excitement packed into the second hour. The effects work is astonishing — then again, when the team members' past credits had included the likes of Aliens, Terminator 2: Judgment Day and the original Star Wars trilogy, that was to be expected. While Schindler's List was sweeping most of the major Oscars, Jurassic Park went 3-for-3 in its technical bids, winning for Best Visual Effects, Best Sound and Best Sound Effects Editing. Even more impressive was its phenomenal box office: At close to a billion dollars internationally, it still ranks among the all-time Top 20 grossers. ***1/2

The Lost World: Jurassic Park - You didn't have to be a rocket scientist — or even a paleontologist — to know that Jurassic Park's 1997 sequel would similarly rake in tons of dough, regardless of the quality of the picture. That was doubtless a relief to studio suits, considering that this is arguably Spielberg's most impersonal movie to date, failing to retain its predecessor's sense of mystery and majesty. It's entertainment on autopilot, with the dinosaur basically reinvented as a slasher-flick stalker. Goldblum returns from the first film, but his character has been transformed from an eccentric sidekick into a listless action hero; new co-stars Julianne Moore and Vince Vaughn fare even worse. The effects are about as impressive as those in the original Jurassic Park; unfortunately, it's the movie surrounding them that remains hopelessly mechanical. ** 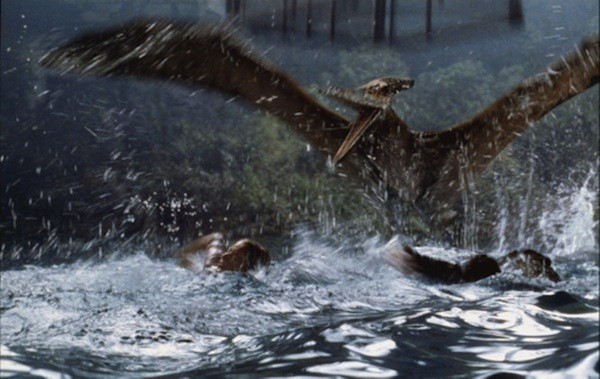 Jurassic Park III - Spielberg served only as executive producer on this 2001 effort, handing directing duties over to Joe Johnston (Captain America: The First Avenger). Screenplay duties were assigned to Alexander Payne and Jim Taylor, the team that would later win Oscars for penning Sideways, and William H. Macy joined a cast that included Neill and Dern, both returning from the first picture. Yet despite all this talent to burn, JPIII still turned out to be even worse than the second installment. There's one exciting sequence involving Pteranodons, but the rest is clumsy, uninvolving and often laughable — the scene in which Neill's character learns to speak "Velociraptor" and orders these vicious creatures to go away is particularly risible. In short, this is Hollywood's version of a red-light district, with lots of talented people selling themselves for quick cash. *1/2