The 17th annual RiverRun International Film Festival ends today, but before it draws to a close, I caught two final films on Saturday before prepping to make the trip back to Charlotte. Yesterday began, however, with a hot beverage and conversation.

To be more specific, Duane Byrge, senior film critic for The Hollywood Reporter, and I led a Coffee Talk for a handful of students at Wake Forest University. As we discussed film criticism, viable career paths and filmmakers such as Ingmar Bergman and Woody Allen, I appreciated how invigorating it was to talk to kids whose knowledge of cinema extends far beyond Adam Sandler comedies and Transformers sequels. It was a nice reminder that people of all ages still appreciate movies as an art form unto itself and not just a way to pass a Saturday night.

SEX(ED): THE MOVIE — “What if I want to have sex before I’m married?” asks the young high school boy. Replies the teacher, “Then you better be prepared to die!” And thus goes the helpful advice seen in one of the vintage clips shown in Sex(Ed): The Movie, a humorous if truncated look at the manner in which sex education has been taught in the United States over the past century. As she revealed in a post-screening Q&A session, writer-director-producer Brenda Goodman spent eight years on this project, culling snippets from hundreds of sex-ed films from 1916 through the present day and landing interviews with various talking heads ready to discuss the taboo topic at hand. What emerges is hardly revelatory — this is a puritanical nation that has always had trouble engaging in worthy conversations when it comes to the birds and bees — but thanks to well-selected clips and some insights from the engaging participants, the film is well worth the time. Goodman employs the clips not only to illustrate the evolution (or lack thereof) of cinematic representations of sexual behavior but also to show how they fit into larger national discussions involving reproductive rights, homosexuality, the women’s movement, birth control and more. The movie could stand being longer — at 77 minutes, there’s simply too much material to adequately cover — but the vintage clips are fascinating to watch, especially the early ones that lay the blame for venereal diseases entirely on women. More than one interviewee also points outs how the sex-ed films aimed at males tended on balance to be more jovial, often with an air of “boys will be boys” insouciance, while the ones geared toward females tended to be more shrill as well as less informative. One would think that the passage of time into more progressive eras would help, but nope: Between President Clinton’s cowardly and hypocritical dismissal of Surgeon General Joycelyn Elders for speaking positively and honestly about masturbation to the money- and time-wasting abstinence programs in high schools, the film illustrates that the U.S. remains as frigid as ever. 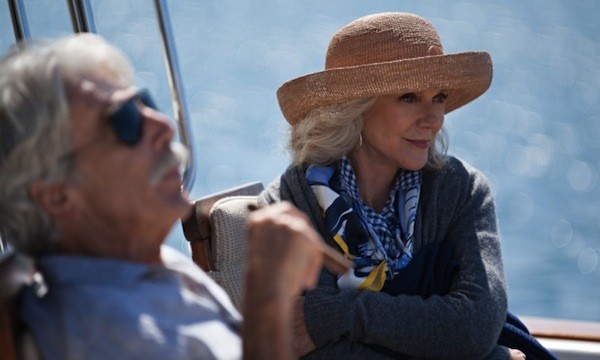 I’LL SEE YOU IN MY DREAMS — It’s an understandable injustice that Gwyneth Paltrow is far more famous than her equally talented mom, Blythe Danner. After all, Paltrow has enjoyed plenty of leading roles in films (including an Oscar-winning one for Shakespeare in Love), while Danner has almost been exclusively relegated to supporting turns over the course of her lengthy career. But director Brett Haley, a graduate from UNCSA here in Winston-Salem (he and producers Rebecca Green and Laura Smith were on hand for a post-screening Q&A), has graciously handed her a plum starring role in I’ll See You in My Dreams, a confident feature angel-kissed with an enviable cast (extending well beyond just Danner) and an often lovely script penned by Haley and Marc Basch. Danner stars as Carol, a widower who lost her husband 20 years ago and is in the process of losing her ailing dog in the film’s first few minutes. With her faithful companion no longer at her side, Carol now drinks her wine and eats her salads in an empty house, with her social life consisting solely of playing cards with her three friends (Mary Kay Place, Rhea Perlman and Nebraska Oscar nominee June Squibb). Her life soon gets shaken up, though, by the near-simultaneous arrival of two men: Lloyd (Martin Starr), her 30-something pool boy, and Bill (Sam Elliott), an eligible bachelor her own age. Haley nicely contrasts Carol’s relationships with the pair, showing how her friendship with Lloyd allows her to engage with a kindred spirit (he gets her out of the house for beer and karaoke) while her romance with Bill provides her with the tenderness and closeness she hadn’t even realized she missed. Haley and Basch fill their script with gently humorous incidents (the seniors smoking pot, Carol’s close encounters with a rat), but these almost feel like filler when compared to the complex human connections at the heart of this sensitive film.