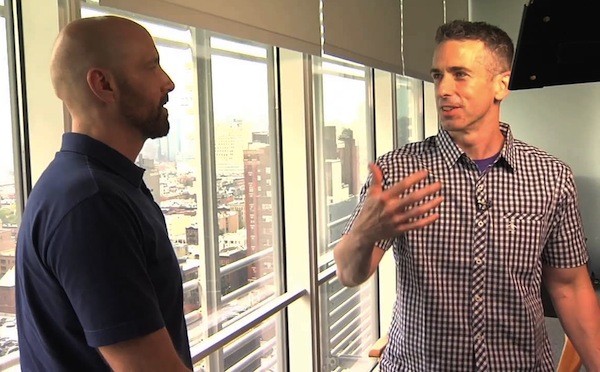 DO I SOUND GAY? — David Thorpe is over 40 and under the impression that his voice is one of the reasons he’s having trouble finding true love. Nursing his wounds from a relationship that just ended, Thorpe fears that his elevated, effeminate manner of speaking will prevent him from landing any suitable boyfriends in the future. Hence we have Do I Sound Gay?, Thorpe’s entertaining documentary in which he interviews various people (many famous, some not) about the subject while also seeing vocal coaches to assist him in lowering his own speech. A scattershot feature that nevertheless remains consistently watchable, this succeeds less when it focuses on Thorpe’s attempts to deepen his own voice — despite what he thinks, he does not sound less gay by the end of the film — and more when it offers insights from Thorpe’s family members as well as numerous celebrities. Nationally syndicated columnist Dan Savage (read him here in CL!) speaks briefly about how both misogyny and internalized homophobia play large roles in why homosexuals don’t like other gay men who sound feminine (one of the important discussions sadly underserved by the film), while author David Sedaris admits that he takes it as a compliment whenever someone in person tells him he doesn’t sound gay. Fashion designer and Project Runway co-host Tim Gunn and Star Trek actor and Internet icon George Takei also contribute soundbites, mostly about the importance of owning one’s homosexuality, and there’s a touching look at Zach King, the headstrong Ohio teenager who in 2011 was savagely beaten by a bigoted classmate (the thrashing was caught on video) just because he was different. The film also recalls the great documentary The Celluloid Closet in one segment as it traces the character of the homosexual male through film history, beginning as a know-it-all sissy before being reinvented as a hissing, debonair villain (the Disney animated features are especially fond of the latter interpretation, as repped by Scar in The Lion King, Professor Ratigan in The Great Mouse Detective, and many more). And because Thorpe originally hails from the Carolinas (Columbus, SC, to be exact), there’s also footage of two of the most loathsome figures to ever emerge from these states, degenerate right-wing politicians (and raging homophobes) Jesse Helms and Strom Thurmond. The audience boos and hisses that greeted their appearances proved to be music to the ears.

YOSEMITE — In between making movies, hosting the Oscars, volunteering at a children’s hospital, going to college, touring with his art exhibition, curing cancer (just kidding … for now) and God knows what else, Renaissance man James Franco took time out to pen the short-story collection Palo Alto. Despite meeting with less-than-rapturous reviews — and with some in the literary world even suggesting that only his star power got the book published in the first place — Franco decided that his prose deserved the big-screen treatment. First, there was 2013’s Palo Alto, directed by Francis Coppola’s granddaughter Gia Coppola and starring Emma Roberts, Val Kilmer and, of course, Franco. Feeling that his words deserved more screen time, he next decided to follow in the unfortunate footsteps of other millionaire celebrities and created an Indiegogo fundraiser in order to gather money from working stiffs to make three more films based on his stories. Memoria has been minimally screened while Killing Animals is still on the way; in the meantime, there’s Yosemite, a desultory drama that may lead to Indiegogo contributors asking for their money back. Weaving together a trio of tales by Franco, the film takes a look at a three classmates and how their separate storylines occasionally bump into each other and eventually merge. Franco himself appears in the first segment, as the father of one of the lads, and the child actors all do decent work, even if they never quite match the excellence level of the youthful leads in the Matthew McConaughey flick — and previous RiverRun title — Mud. But with little variation in the narrative tone or visual delineation, and with shorthand brush stokes employed in the painting of the characters, the film unfortunately is little more than one long slog.