OK, maybe Taylor Swift isn’t singing about the growing art of vaping, but the enthusiasm surrounding this news is certainly appropriate.

This Saturday, March 7, KURE Vaporium and Lounge (based out of Mooresville) is having its second grand opening celebration this year, the first in Gastonia in late January.

The globally recognized business received $4.2 million in funding from Siskey Capital and is wasting no time expanding, hoping to open at least eight locations around the country this year — at least two more in Charlotte.

And of all places for a new business flourish in the Queen City, this one is making its debut in none other than NoDa.

KURE’s new location boasts modern décor and a friendly atmosphere. Along with a unique vaping experience, KŪRE offers beverages, snacks and select coffees at each location. And no worries, Wi-Fi is on the house. 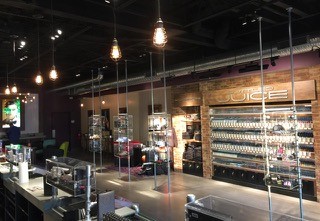 According to a press release, CEO David Peterson says, "we strive to be more than just a 'vape shop.' We bring the passionate art of vaping to the everyday consumer while continuing to support and preserve the traditional grass roots of its origin."

So what are the grassroots of vaping?

The first electronic cigarette patent was filed in 1963, but the hobby didn’t take off because, let’s face it, cigarette companies weren’t ready to relinquish their control of the market.

In 2006, a Hon Lik, who hated smoking and lost his dad to lung cancer, released his own smoking alternative to the masses. Apparently, Lik dreamed up his innovation — literally. After forgetting to take his nicotine patch off overnight, Lik experienced a trippy dream in which he was drowning, but the water that filled his lungs turned to harmless vapor he could breath in.

With that revelation, a fad was born.

Today, there are a variety of vaping products available to newbies and enthusiasts alike.

According to the aforementioned press release, KURE prides itself on offering its customers a well-rounded vaping experience, with a place to shop, lounge and vape. NoDa’s location will be “stocked with the most recognized brands in vaping products including KŪRE's own premium line of vaporizing pens and e-Juices.”

The hook here, though, is that vapers can purchase freshly made e-Juices made by a staff of 'Kūrators,’ “well trained and experienced mixologists who can 'blend' over 90,000 unique flavors from the KŪRE Juice On Tap bar,” according to the release.

With so many flavor options, it’s a good thing KURE lets customers try before they buy.