Question the Queen City: Daisy and Violet Hilton return to the screen

It's been nearly 45 years since their death here in Charlotte. Many longtime residents have heard or know first hand the tale of Daisy and Violet Hilton, the internationally famous conjoined twins who became celebrities of vaudeville, stage and a handful of obscure (but fascinating) films. 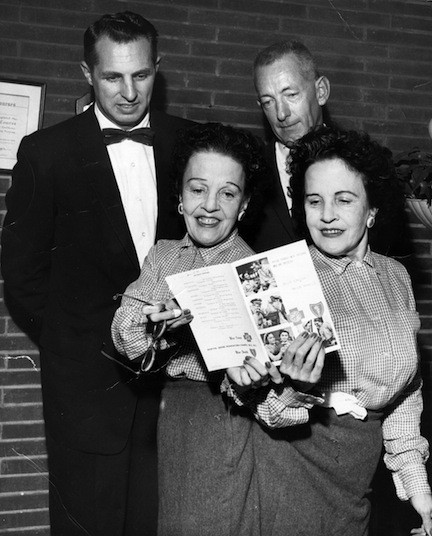 After a lifetime like a roller coaster ride, they ended up in Charlotte in July, 1962, while on a film promotional tour. They had appeared in Charlotte at the old Carolina Theater in 1945 and it was thought another appearance here 17 years later would be as successful.

It was not, and they were left high and dry by an under-handed manager to fend for themselves in a town they were barely acquainted with.

I've written about them before for Creative Loafing and elsewhere in greater detail. I have to admit — they've always held a personal fascination for me. They spent their final years here, working as a produce clerks at a local grocery store, before succumbing to the Hong Kong flu epidemic in 1969. As it turns out, they've become a personal fascination for a number of other people, as well.

Broadway playwright Bill Russell produced a musical about their lives, titled Sideshow, after a personal friend gave him a copy of a paperback booklet (Daisy and Violet had sold at theatrical and night club appearances) that was uncovered at a flea market. The show initially debuted in 1997 to moderate success and was revamped this year and is currently on Broadway at the Saint James Theater through Jan. 3, 2015. 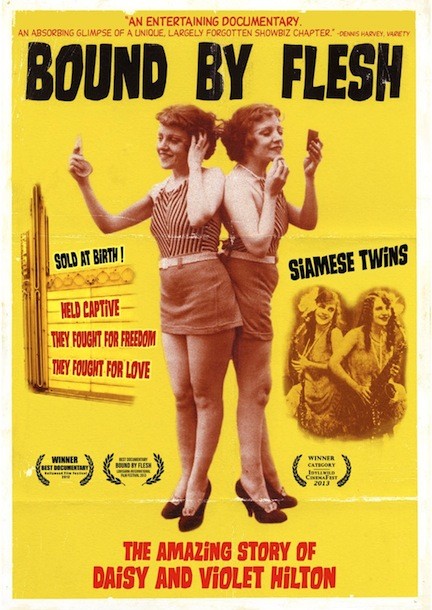 They were also the subject of a nonfiction book titled The Lives and Loves of Daisy and Violet Hilton: A True Story, by Dean Jensen, and, most recently, the focus of a documentary by filmmaker and actor Leslie Zemeckis. Bound By Flesh, which explores their lives from cradle to grave, is currently available on Netflix for live streaming.

“I discovered their story while working on another documentary called 'Burly Q,'” Zemeckis explains. “Then I read Dean Jensen's book. I became totally obsessed and realized I wanted them to be the subject of my next project.”

Zemeckis spent a large part of the effort in research and tracking down people that were acquainted with Daisy and Violet. She lucked out when she came upon their goddaughter. “Camille (Rosengren) was probably my greatest find during the research process,” Zemeckis recalls. “As their goddaughter, she knew so much about them and had a lot of stories to share.”

Zemeckis is quick to confirm she was so taken by the Hiltons because of the unique challenges they faced during their lives.

“They made the best of their situation,” she explains. “In the process, they achieved stardom. And we don't have people like this around now. With prenatal care and the advances in medicine today, most twins are separated, so you're not going to see 'Siamese' twins. At that time, sideshows were part of our culture, but it's not now. They became famous because of what they were.”

Leslie Zemeckis is married to veteran filmmaker Robert Zemeckis (Romancing The Stone, Back To The Future, Death Becomes Her, Forest Gump, What Lies Beneath and Polar Express, among many others), so she's no stranger to the production process. Her husband (who is credited as executive producer in Bound) was on hand to share his thoughts about the effort. “He was,” says Leslie. “He would watch the clips with me and tell me if they made sense and if it flowed well. It was great to have his input.”

In addition to the current on-demand screening on Netflix, it's also available on DVD. Zemeckis also confirmed she's also about to close on a deal for international distribution of Bound By Flesh, which will take Daisy and Violet's story to 21st century audiences around the globe.

It's with a touch of melancholy to note Daisy and Violet would not live to realize the notoriety they had yet to achieve. Nearly half a century after their deaths in a small two-bedroom bungalow in what was then a small southern town, the Hilton Twins are still beloved, perhaps even more so today.

“I think they were lucky to have landed in Charlotte,” Zemeckis observes. “They were with a community they felt protected by and had some security that wasn't there previously. They were with people that were supportive, and they were happy.”