Charlotte native Kendra James was thrust into reality TV stardom when she appeared on season four of Oxygen network’s Bad Girls Club in the winter of 2010. Audiences tuned in every week for four months to see what type of chaotic — drunken, violent, sexual, hilarious, impulsive — situations the young women would be shown in. James also went on to be cast in a spinoff show, Love Games: Bad Girls Need Love Too, that year.

And then she did what most reality TV starlets do these days: she embarked on a career, so to speak, of being paid to host parties and nightclub events around the country. An impromptu tour of sorts that she found herself on for two years. She made a lot of money and enjoyed a lot of wild nights. She “turned up,” as they say.

But then it was time to get back to reality — real life, not that stuff you see on TV. And she’d made a name for herself, and quite a few headlines, along the way, that she wasn’t too proud of. Now, at age 27, she wants you to know that she’s making changes for the better. And she’ll take a big step this Sunday when she gets baptized at Elevation Church. 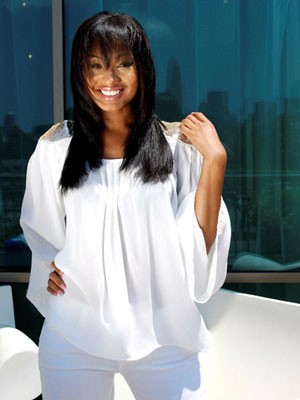 Here’s the latest chapter in her story, as told to Jarvis Holliday:

I feel like this has been in the making for a couple of years now, ever since I’ve gotten off the fast train of promoting parties and doing parties and being in the clubs — that real fast, intense life which was for about two years after I got off the show. It’s kind of been on me that I need to have a big shift in my life, where I was going personally. Even though I’d kind of gotten myself out of the rat race of doing the parties and hosting, I still had a lot of issues going on. I still had to deal with stress, and just the remnants of things that were happening. It got to the point where I said, ‘I can’t do this by myself. I don’t have the tools to get me in the right mindset, to start making positive decisions on a constant basis.’

I would do some positive stuff and then retreat back, live this fast lifestyle: ‘I don’t care, just do it.’ There was something more that I wanted to do. I eventually wanted to be a positive influence … When I was traveling, I would hear a lot of young girls saying ‘I wanna be like you. I wanna be on TV.’ It was just really weighing on me, because that’s not what my goal was. And I don’t think it’s attractive or cute to idolize this stuff that happens on these reality shows. But it’s more extreme when I hear it from young girls and young women who don’t see another option. How can I change and be someone they can look up to if I don’t really do the work to do it? Now, I can read all of the self-help books I want, and I can try to make some changes, but I felt that realigning with the bible and realigning with church was going to be the path I wanted to get on.

I was in the car one day — this was a couple of years ago — and I turned to the gospel radio station. I was tired of hearing the ‘fuck that bitch’ type stuff. So I turned to the station and I loved it, and I had an emotional response to it. It was really heavy. So I started looking for a church that was young and kind of up and coming, wasn’t really big, but that could meet me where I was and not judge. So I found that church in Have Life. It was the integral place to connect and find people who were embracive and not judging at all. They were like, ‘We understand where you’re coming from and we understand where you could be.’ And by that, I felt really motivated and wanted to really start making some changes. So, I was there for about two years.

And I’m just really extreme — if I’m doing one thing, I just dive into it. And if something went wrong, I’ll just dive out of it. So I had that period of kind of flip-flopping, where I’m really into church and then I’m really into the clubs. But they kept strong with me, kept a relationship with me, kept checking on me, and spoke the word unto me. I started going to Elevation only recently, within the last couple of months because I have a co-worker that goes there. Not that there was anything wrong with Have Life, because I really owe it to them for the lifestyle I’m living now, but Elevation has a bigger span and a bigger network of people, has more of a variety in their groups, whereas Have Life is primarily young families.

There were people in the Elevation groups who could relate to me — no kids, single. I know you’ve probably heard about Elevation — how big it is and all these satellite campuses, but they also have these eGroups, which are smaller groups that you meet with on a weekly basis. So I have a group that I meet with that really encourages me. It’s nothing like having someone speak positivity into your life. People really underestimate that. Whether it’s religious or not, you have to have people that are motivating you to be better and do better — and who don’t take your shit. Like, ‘You can say whatever you want to say, but that’s not right. That’s not a good choice.’ And you need to have people who will tell you that. The people that I choose to be around are fundamentally using the bible as a reference.

And the power of being around that and making those choices can really open up your world, and you don’t feel so burdened by all the decisions you made and the mistakes you made, and what I could’ve did and should’ve did. It kind of let’s you breathe and be in this space that you’re in. I’m really excited about it. It doesn’t mean I’m going to be perfect — and please don’t let anybody think I’m going to be a saint after this, because I’m not. Everybody’s going to make mistakes, regardless. I will be one of them. You might still see me in the club — I don’t know. Hopefully I’m not turned up like I usually am. But it’s a lifestyle change, and something you have to work at.

I can’t live my life thinking about what other people are going to say. I know I’m not perfect; nobody’s perfect. But I know myself and I know my strengths and my weaknesses. One of the things that I do know is that I like to be held accountable, and in order for me to be held accountable I have to tell people. I have accountability partners. So when I have these people in my life, that know where I’m trying to go, to constantly be reminded, and when you start to stray you get back on track. And that’s how I’m choosing to live my life moving forward, that I know that I’m accountable to people and I know I’m accountable to my word. That’s a challenge I’m going to take on.

My family and friends are excited, and they’ve always been supportive. However, they’re a little skeptical. Everybody has their right to be. It’s not easy, and I’m not a saint, and I’ve done a lot of things. My mom was like, ‘You’re going to get baptized, but you still might turn up every now and then.’ I think part of it is that I want to prove to her that I’ve made a change — another part of being accountable, like if I say I’m going to do something I want to be able to do it. So they’re skeptical, but supportive nonetheless. And I expect that. It’s a personal journey; you make the choice by yourself, and it’s your life.