Theater review: We Will Rock You

Despite the mild, boorish hostility of its public address announcement, We Will Rock You turns out to have a modicum of heart, for my wife Sue and I were able to escape its clutches with the ability to hear and see. The blinding, deafening assault at Belk Theater actually begins before the lurid curtain goes up on this devoutly weird musical inspired by the sacred oeuvre of Queen. It is a glorious affirmation of how much noise three guitarists, three keyboardists and three drummers can make when amplified by a diabolical - yet ultimately merciful - techie manning the soundboard. 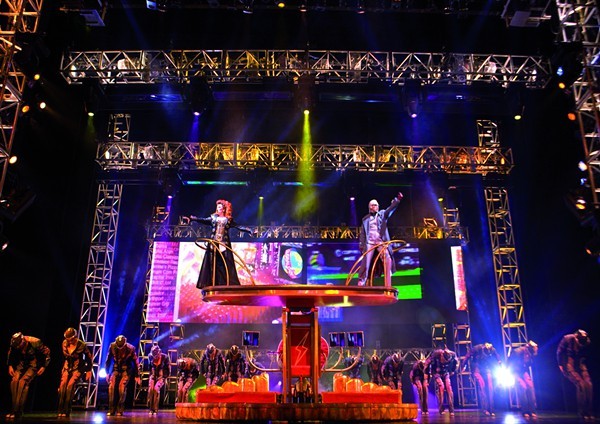 In a future world, the sacred music has been almost entirely lost, stamped out by the overlords of Globalsoft, which downloads pap to all the planet's subscribers, despises the life force of rock 'n' roll, and applies a laserized shock therapy to anyone infected with it. Decked out like a golden termite, Killer Queen ruthlessly rules Globalsoft, while her loyal henchman Khashoggi hunts down all dissenters.

Afflicted with redemptive visions - and scraps of rock lyrics - Galileo doesn't realize he is one of the dissenters until he is persecuted. Scaramouche is more self-aware, and when she hooks up with Galileo, she turns out to be the brains of the outfit. Fleeing from Khashoggi, Galileo and Scaramouche find succor at the Hard Rock Cafe, the secret outpost where the outlawed Bohemians dwell, awaiting their redeemer.

Thank God they do, for at the Hard Rock we find Buddy, the leader of the Bohemians. In a world ruled by comic book villains, chiefly opposed by a King Arthur knockoff and a generic she-wolf, Ryan Knowles' exploits as Buddy are an oasis of comedy pleasure. For a champion of individuality and artistic inspiration, Brian Justin Crum is an insanely typical, assembly-line copy of the contemporary musical hero. Where have you heard him before? Everywhere.

Crum and Ruby Lewis as shero Scaramouche have vocal chords of steel, a necessity if you're going to blast out the Queen songbook for two hours. They get some respite from Jacqueline B. Arnold, a massive talent trapped in an impossibly gaudy role, and P.J. Griffith, who turns Khasoggi into a distinctively Arian annoyance. For all his strivings to keep this show palatable, Knowles only gets one solo as Buddy, "These Are the Days of Our Lives," a relatively quiet interlude.

Surprisingly, I encountered some recognizable melody along the way, including "You're My Best Friend" and "Crazy Little Thing Called Love" toward the end of Act 1. The remainder of the 24-carat hits are withheld until the end, when we hear the title song and the inevitable closer, "We Are the Champions." Leaving prematurely, the critic from our newspaper of record missed the pre-planned encore, "Bohemian Rhapsody," a mighty masterpiece of pretentious silliness. Don't let this happen to you!

Quirks on loan from "Rhapsody," including the name of the main characters, pop up across Ben Elton's script. But I'd like to think "We Will Rock You" also exerted some influence. In the sword-in-the-stone climax of the show, Galileo journeys to Graceland - a forgotten shrine to Elvis Presley in this dystopian future - to recover the world's last remaining musical instrument. Along with "Crazy Little Thing Called Love," the verses of "We Will Rock You" are the only portions of Elton's score that I could imagine being sung by Elvis.

Of course, the more familiar refrain - drummed so loudly that it will hit you like a fist to the chest - is pure anarchic noise, like so much of the evening-long barrage. From the equally deafening response of the opening night crowd, Queen fans wouldn't have it any other way.