I just read an article online that cited the 75th anniversary of some of the best movies ever made. One of them was a film called The Women starring Joan Crawford. My mom was named after her, and she has told me over the years that Joan had a close relationship with Charlotte and visited often. Do you know why? - Barbara Jones, Charlotte 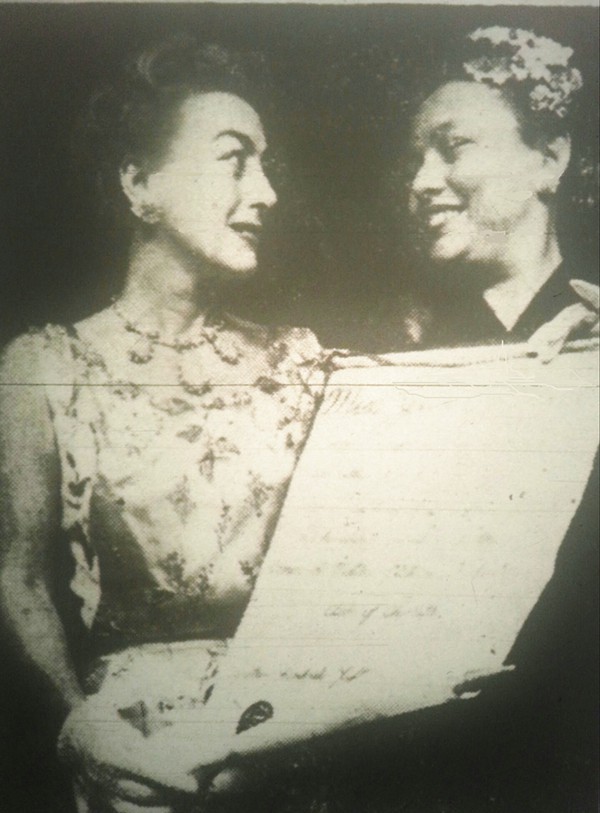 Actress Joan Crawford's ties to the Queen City began in the 1950s, after she married Alfred Steele, a board chairman of Pepsi-Cola, which is a Carolina-born product.

Steele and Crawford had been married just four years when she visited the city for the first time, in 1959. She and her husband visited several towns and cities in the state, scoping out a location for a new Pepsi syrup-production plant, among them Hickory, Winston-Salem and Wilmington, deciding on the latter for the site.

Since Pepsi was invented in North Carolina and Charlotte is the largest city in the state, it made perfect sense that the Steeles would make a stop by the Queen City to check out the bottling facility on South Boulevard and meet with some of the executives of the region.

She and Steele checked into the posh Barringer Hotel (which still stands at 426 N. Tryon St., now serving as low-income housing), where they held a press conference. At the time, Charlotte was far less cosmopolitan and very easily wowed by the presence of such a well-known individual as Crawford.

Steele maintained a low profile in the background of the press conference, supplying his beloved with refills of Pepsi, while local media queried Crawford on such hard-hitting topics as how she maintained her figure and when she was going to make another film like Mildred Pierce.

"I don't eat sweets," she said, "and I don't eat things like bread. They tend to put on the pounds." One reporter made a comedic observation after Crawford's reply: When she leaned forward her purse fell open, and it was full of candy.

By the time the actress made her first visit to Charlotte, she had already seen the high points of her career: an Academy Award for Mildred Pierce, a nomination for Sudden Fear, and tremendous amounts of critical praise for such films as Letty Lynton, Possessed, A Woman's Face and Humoresque, among many others. Her career in film began in 1925 with the film Pretty Ladies and ended with a 1971 episode of the television series The Sixth Sense, called "Dear Joan, Were Going To Scare You To Death."

Her last big-budget film, Autumn Leaves, had come in 1956 from Columbia Studios. By 1959, the best of her motion picture work was behind her. Her priorities were now with her husband and his business.

"I consider myself one of the most fortunate women in the world," she told Charlotte press. "I've had a great career, and now I have the finest man in the world. All I want to do is make him happy. As for movies, I haven't done one in two years ... [Mildred Pierce] was fun ... but we'll see about that when we finish traveling."

In another locally reported piece, a writer who dined with Steele and Crawford in their suite at the Barringer noted that Steele "was on a strict weight-loss diet" and later, while dining, choked on a bite of food, "turning red-faced before dislodging [it]."

After Charlotte rolled out the red carpet for the couple they returned to New York City, anxiously anticipating an upcoming vacation to Jamaica. Days later, Al Steele was dead, reportedly of a heart attack. Christina Crawford, her adopted daughter, has since stated that her mother killed Steele and that prior to his death, he was in perfect health.

Joan Crawford visited Charlotte many more times throughout the 1960s (she was actually chosen queen for Charlotte's annual Heart Fund Ball), tending to Pepsi biz and visiting with friends from here she had become acquainted with through the business. "It's a beautiful city," she was quoted in a later interview. "The people are gracious, and I've enjoyed every trip I've made here."

She died in 1977 and is mostly known as the subject of Christina's book Mommie Dearest and the movie Faye Dunaway starred in portraying her.