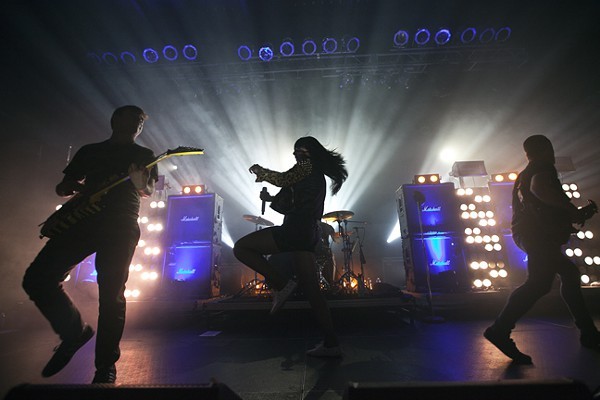 In a flash as quick as one of the many strobe lights, Sleigh Bells hit the Fillmore stage on Tuesday night, tore through a 45-minute, 12-song set before returning for a four-song encore and leaving the crowd in a pile of sweat. Given the band's volume, intensity and raw energy, I'm not sure fans could ask for much more - aside from a return visit.

The noise-rock duo, which tours as a quartet, started the night with "Minnie" as singer Alexis Krauss danced and guitarist Derek E. Miller leapt, jumped and spun his way around the stage while shredding riffs. A quartet of Marshall amplifiers were stacked on either side of the drummer as the band's sonic assault hit the audience with thunderous might. 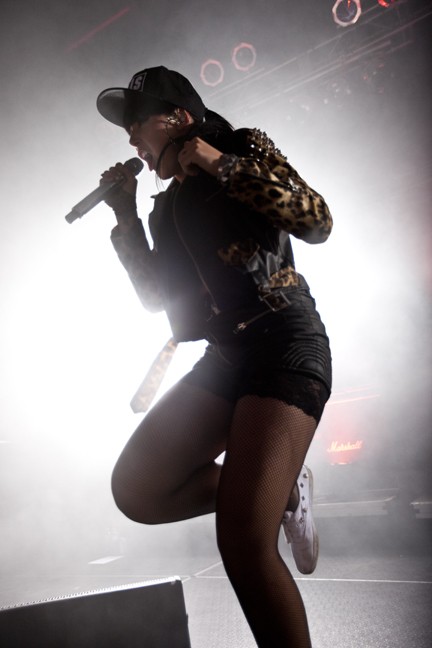 It was a presentation that continued throughout the band's debut Charlotte performance. Having seen the duo perform without the touring members - drummer Chris Maggio and guitarist Ryan Primack - the added depth provided extra punch to the band's sound. Krauss spent the majority of the night bouncing around the stage, whipping her hair around as she sang with plenty of range, sass and sweetness.

Sleigh Bells played tunes from all three of their albums, focusing heavily on 2013's Bitter Rivals. The regular set concluded with longtime favorites "Riot Rhythm" and "Infinity Guitars," from their 2010 debut album, Treats. Krauss, pointing out that the band hadn't played Charlotte before, asked the crowd to dance often, noting, "We don't know when we'll be back."

The crowd, though numbering only a few hundred, did its best to give every bit of its energy back to the band, singing and dancing along for the duration of the show.

When Sleigh Bells returned for an encore, Miller was carrying an acoustic guitar, but it did little to calm the band's enthusiasm or sound. The show ended with Krauss standing alone on stage singing "Rill Rill" to a backing track as the rest of the band watched from the photo pit down front.

The combination of '80s pop sensibilities with Ministry-like drumming and chugging riffs combined for a quick hour of music that left fans hoping Sleigh Bells will be back before too long. 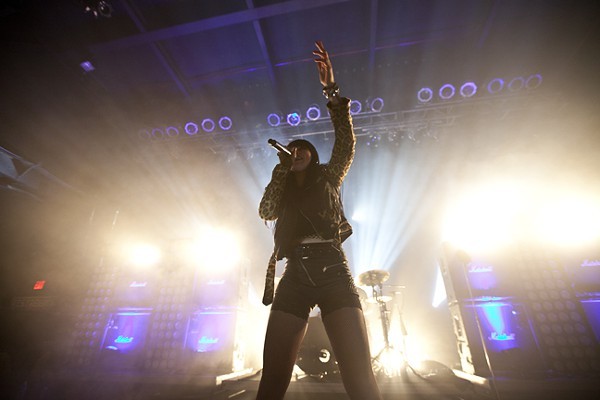