Today's reviews from the front lines of the Winston-Salem film fest consist of a strong if incomplete documentary and a weak if well-acted feature film.

GORE VIDAL: THE UNITED STATES OF AMNESIA - Last year's RiverRun International Film Festival included a screening of the excellent documentary Plimpton! Starring George Plimpton as Himself (reviewed here), and it would make a suitable bookend feature to watch alongside Gore Vidal: The United States of Amnesia. Both Plimpton (who passed away in 2003) and Vidal (who died in 2012) were highly intelligent liberals who often found themselves in the same circles, whether attending literary events or hanging out with John F. Kennedy and his family. The Plimpton piece, however, did a better job of illuminating its subject; while it was as much of an unbiased love letter as this new picture, it succeeded in presenting a rounded portrait of the man. The United States of Amnesia, on the other hand, presents Vidal in full "last lion of liberalism" mode, but it goes out of its way to bypass anything controversial and unflattering about the man. It's a fascinating movie but an incomplete one. Still, it does present Vidal in all his raging glory, whether railing against such expected right-wing targets as William F. Buckley, Ronald Reagan and George W. Bush ("We've had bad presidents before, but never one who was such a Goddamned fool") or speaking ill of Democrats like Harry S. Truman and JFK (Vidal says he was personally very fond of the latter but felt he was "disastrous" as a president). The film gets sloppy with some details: For instance, while Vidal contributed to the script for 1959's Ben-Hur, his work was uncredited, yet here it sounds as if he wrote the entire picture. And while there are mentions of the wretched screen adaptation of his novel Myra Breckinridge (starring Raquel Welch) and the solid film version of his play The Best Man (starring Henry Fonda), director Nicholas D. Wrathall fails to even bring up the notorious motion picture Caligula, for which Vidal submitted the original script (which was changed to such a degree that the author wanted his name removed). More problematic is the refusal to bring up many of the major controversies in the life of a man who lived for controversy. Vidal's relatives claim that he had slept with underage boys at points in his life and that he suffered from dementia at the end (he changed his will shortly before the end so that Harvard received his entire inheritance while his family received nothing). These are allegations and perhaps should not have been in the film; not so with his views on the 13-year-old that Roman Polanski raped ("I really don't give a fuck. Look, am I going to sit and weep every time a young hooker feels as though she's been taken advantage of?") and young boys molested by priests ("Hustlers who were sending signals"). Gore Vidal: The United States of Amnesia is a compelling movie as far as it goes, but a warts-and-all portrayal would have been a more honest way to honor his legacy. 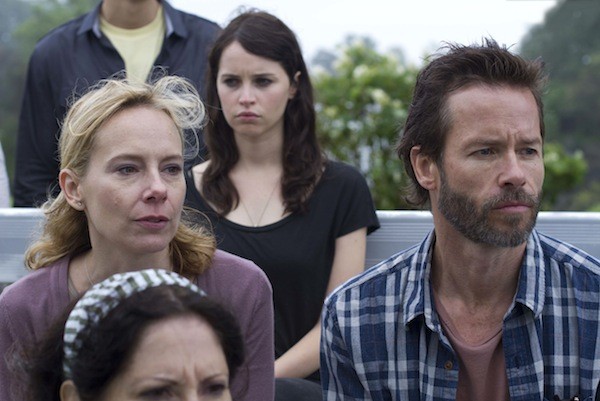 BREATHE IN - Writer-director Drake Doremus' 2011 effort Like Crazy won the Grand Jury Prize at that year's Sundance Film Festival, even though it was "three-quarters twee and one quarter Glee" (see CL's review here). This latest picture, which Doremus co-scripted with Ben York Jones (as he had Like Crazy), isn't much of an improvement: A film about a May-December romance, it would be laborious to sit through at any time of year. The Reynolds family - dad Keith (Guy Pearce), mom Megan (Amy Ryan), daughter Lauren (Mackenzie Davis, a promising young actress) - has opened its upstate New York home to Sophie (Felicity Jones), a British exchange student in the U.S. for one semester. Megan does everything to make the young woman (who has just turned 18) welcome, and while Lauren initially balks at sharing her room with another person, she's also as gracious as can be expected. Keith is another matter. A music teacher who longs to land a symphony job full-time so the clan can hopefully afford to move back to New York City, he's nothing but moody around Sophie, and she in turn acts distant to him. While those of us might understandably think they're just sleepy during the moments of their encounters, it's actually a smoldering passion that's developing between them, and soon, the pair have graduated from wistful stares to touching fingers and patting shoulders. The next step is to consummate their relationship, but will the pesky wife and meddlesome daughter interfere with Keith's attempts to recapture his long-gone youth? It's really hard to care, since Keith is painted not as a middle-aged man suffering from a real existential crisis but merely a guy hoping to score some teenage nookie. While Doremus and Jones receive most of the blame for their characters' failure to communicate with audiences, there's also the fact that Pearce and Jones, while fine individually, have absolutely no chemistry together. The majority of the film is merely a languid affair, but then it adds a series of head-smacking developments (a chance sighting, a car crash) that are as transparent as one's breath in sub-zero weather.