Now that plans to turn the old Eastland Mall into a movie studio and sound stage are dead, and the relationship between City Council and property developer Studio Charlotte seems to have soured, the city must come up with a new way to use the 80-acre property it purchased for about $13 million in 2012.

The city probably has its hands full right now with the fallout from #ScandalCLT (Patrick Cannon's resignation), so I'm here to offer up my ideas for Eastland.

I feel I am qualified to make recommendations because I worked and/or loitered at the mall for most of the mid to late '90s. Plus, I once got a bullet hole in my car in the parking garage that I was never reimbursed for, so as the mall's new owners, the city kind of owes me.

Here are my expert recommendations: 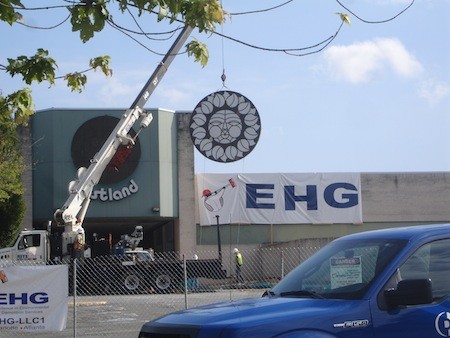 1. Housing for the homeless. It's too bad they already tore down the mall, because it probably could've sheltered a thousand people. But if the city doesn't want to put up the dough for some apartment buildings, the Eastland 80 acres could become a massive tent city, and its close proximity to public transportation could make it easier for residents to obtain jobs and transition into a more permanent situation.

2. A biodome! But not just any biome. With medical marijuana seeing increasing support within our state and more bills for its legality expected to be proposed in the next session, it's only a matter of time until government weed is being prescribed and demanded. Charlotte should get in the game early and sustainably grow a medical marijuana forest inside a beautiful and secure terrarium-like facility that will hopefully inspire a hit Pauley Shore movie. Then we have the film industry on site after all, and everyone wins.

3. A huge community garden. If housing for the homeless is too expensive and growing marijuana for the sick is too controversial, how about growing healthy food for the hungry? Can you imagine the abundance of nutrition that could be cultivated on 80 acres? Several hours of working in the garden a month could be the price to reap a share of the bounty it provides, which would reduce labor expenses and give city dwellers an education in horticulture.

4. Millennium Park. We love large-scale outdoor art in Charlotte: the Maya Lin balls at the old coliseum, the giant cookies on South Boulevard, the disco toucan downtown. Why not bring elements like these to a public park like Millennium Park in Chicago? We could work on the name.

5. Artificial ocean. There has been talk of the NC Music Factory developers turning the land into a sports complex that would be anchored by an indoor ski slope like the world-famous one in Dubai. But who wants to go to an indoor ski slope when you can drive one and a half hours to the real thing? What we need is a beach. An 80-acre beach. I'm not sure of the logistics involved, but if Lake Norman was created by Duke Energy in the 1960s and a snowy ski slope can exist in an indoor space, I'm confident it can be done. And think of all the beach shops that would open on Central Avenue and Sharon Amity, bringing a cheap towel and hermit crab boost to the Eastside economy.

6. City zoo. In her recent article "Nine better reasons why Charlotte is Weird," our editor in chief reminded us we're the largest metropolitan city without a zoo. We could change that.

7. Bible theme park. If you're not sold on an artificial ocean or a city zoo, consider combining them into a Bible theme park. Think of the exciting Bible adventures that could be replicated - Daniel in the Lion's Den, Jonah in the Whale, The Great Flood. There's a good time to be had by all. Elevation Church has recently reminded us that evangelism is where the money is. This would be a revenue generator for sure.

9. Solar-energy field. Sure beats coal ash in our water supply!