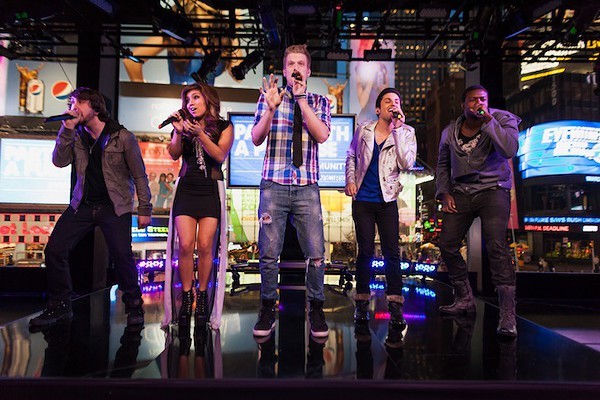 Surrounded by a sea of darkness as a single light shone down, Avi Kaplan belted out a strange-yet-captivating tone - a throaty bass sound mixed with a wispy whistle to help create a stellar version of "The Lion Sleeps Tonight." There aren't many people who can sing two notes at once.

Kaplan was clearly the crowd favorite during the sold-out Pentatonix concert at the Fillmore on March 27, 2014. The bearded bass singer sent most of the women in attendance into a squeal-and-scream frenzy every time he spoke or sang as he often put on an awesome demonstration of control and talent.

Pentatonix offers a mix of imaginative original songs as well as inspired and well-arranged covers. The group, which won the third season of the TV show The Sing-Off in 2011, makes magic happen without instruments. Their complex harmonies drive the crowd wild as often as they leave the masses in silent awe.

Beatboxer Kevin Olusola wowed the crowd by playing his cello, which he named Beyonce, while beatboxing at the same time. A haunting sound poured from the cello - the only instrument that made it on stage - as it met with K.O.'s tightly syncopated beatboxing on the way to a cover of Lorde's "Royals." The transition was flawless and masterfully arranged as singer Mitch Grassi took the vocal lead.

The group's song "Run to You" was a compelling ballad not laden with R&B runs or timed movements but simply sung in pure a capella fashion. When the entire room chimed in on the hook of "Natural Disaster," you thought the roof would blow off.

The incredible range of voices, emotions and song choices helped to keep the show from being redundant. There was even a "sexy" moment as the group invited a fan on stage, singing Lauryn Hill's "That Thing" and transitioning into a doo-wop cover of "Let's Get It On" as she was crooned to. A number of over-the-top R&B runs by Scott Hoying made the moment all the more memorable.

The night ended with streamers and confetti - the a capella version of pyrotechnics? - as Pentatonix left the FIllmore stage with a raucous crowd cheering for more. The group sprang back on stage for one more song which ignited the crowd into a spirit-filled and completely engaging sing-along of FUN's "We Are Young."

With that, the group left the stage a final time as the crowd exited the Fillmore singing - a capella, of course.