On Sunday night, about 40 workers came together in the production kitchen of Amelie's French Bakery to hear owner Lynn St. Laurent apologize to them.

"How do you tell people who work so hard that you're sorry for humiliating them?" St. Laurent told me on Monday. 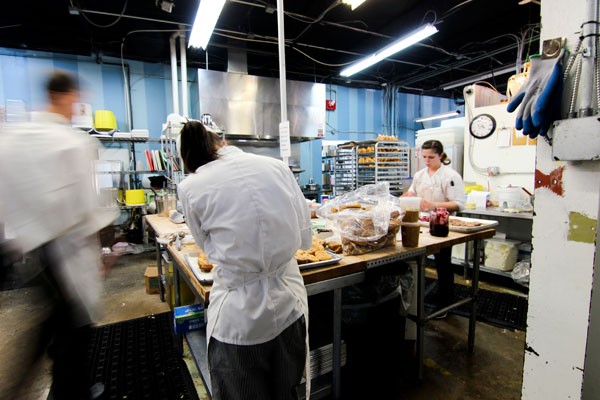 She humiliated them in a poorly worded statement, released Saturday on Amelie's Facebook page, describing those workers as "not otherwise employable," risky and prone to initiating conflicts when they become disgruntled. The well-known warm, friendly tone of Amelie's was replaced by a bitter, elitist voice that spoke of its own work family with a sense of superiority and vitriol.

The statement was a response to allegations - made by a former employee in an open letter - of serious worker's rights abuses.

"We abandoned our voice and posted what we'd been advised," by a business associate, St. Laurent says, though she wouldn't specify who. "None of us caught the word 'unemployable' because we knew who wrote the statement and we knew his heart and what his intentions were."

Amelie's made itself a PR mess to clean up, but that may not be the worst of its problems. The U.S. Department of Labor has confirmed that it received a complaint from a former worker about wage improprieties and is "reviewing the situation."

Though the department would not specifically name the employee, it is likely Justin Miller, a former manager of Amelie's production kitchen and author of the public resignation letter. He alleges that employees are not being paid overtime, are being asked to log into their pay system under two different accounts so that total hours worked is not accurately reflected, are being asked to work off the clock and are working 24-hour shifts without breaks.

St. Laurent says Amelie's pays overtime in every situation in which law requires it, but it uses a strategy called "cross-utilization" to train employees in different areas so they can advance through the organization and earn extra hours. These hours are counted separately from their normal work schedule. St. Laurent says "it would be illegal if we required these extra hours. We use [cross-utilization] only in situations where employees request it and use it for advancement."

She added, "There's very strict guidelines in place and we have people who understand them and monitor and review these processes."

A contact at the N.C. Department of Labor, however, said this practice is illegal. No matter what position or how many positions you hold for a company, it must pay overtime for 40-plus hours worked.

Miller says that he didn't take going public with these allegations lightly. "To be honest, this is really scary. I went into this knowing I might be throwing my career away. This isn't something I'd make up, given these stakes."

Before his year and a half long stint at Amelie's, Miller spent four years in Indiana protesting utility rates with the Citizen's Action Coalition.

His passion for activism is something St. Laurent both admires and sees as a possible cause for him coming forward with what she says are exaggerated claims.

"I have a high regard for people who are activists and work to protect employees. Justin and I are on the same side in that respect," she says. "Maybe this was a good opportunity to bring awareness to his passion. I don't see him as someone who's vindictive, but I see him as someone who ... if it might help the cause, might take facts and misconstrue them."

Though Miller admits he hopes to become a labor organizer in the future, he says the situation at Amelie's spawned his aspirations, not the other way around. He insists his primary concern is for the workers.

Most of the employees who worked under him in the production kitchen had come to Amelie's through a job-placement program for people with criminal records. He says that while it may seem admirable that Amelie's hires people in tough situations, these are the workers most likely to be exploited.

"When they're asked to work off the clock, they fear if they say no, they'll lose their job," Miller says. "And some of them will go back to prison if they lose their job."

Although as an employee he noticed problems coming from management, he kept quiet. The last straw for him was when he and St. Laurent met on Feb. 26 and St. Laurent told him he'd have to end the staff-meal program he had started with his manager's approval.

"I wanted to make sure my staff was getting at least one good meal a day," Miller says. "I felt it was my responsibility if they were working under me."

"His passion for his employees caused him to make decisions that wouldn't have allowed us to stay in business," St. Laurent says, adding that when Miller was a manager, most of Amelie's revenue was going to labor, not enough to food and packaging costs. "That doesn't leave a whole lot to pay the rent and keep the lights on."

But Miller says that even something as basic as having worker's rights information posted somewhere visible, as required by law, is something he had to fight for. He says he brought the fact that the posters weren't present to the attention of two managers, who said they'd "run it up the chain of command" before emails show he contacted the N.C. Department of Labor to complain in May 2013. No action was taken by the department or management, and Miller said the posters were still not up at the time of his resignation, almost one year later.

St. Laurent says she was never made aware of this complaint and calls the situation "ridiculous," saying, "it's just putting up a poster." She admits to being unsure whether the posters are up now. "I would've done it myself if I had known."

The bakery has been hugely successful since opening in NoDa, not just because of its delicious salted caramel brownies and macarons, but because of its image as a progressive establishment doing good work in the community. St. Laurent was even invited to the White House, where she talked about hiring those just leaving jail or rehab. "Our policies in the work place are built around understanding the amazing difference it can make when people with challenges are given a place where they are accepted ... and encouraged to grow," she said during her speech.

Amelie's success translated into a second location in Uptown, a third in Rock Hill, and an expansion into the Atlanta market in the works. Amelie's has much to lose if the U.S. Department of Labor's investigation finds Miller's allegations to be true.

St. Laurent says she's confident her record speaks for itself and that Amelie's will be launching its own internal investigation. It's hired an independent organization to review management processes to ensure they are "consistent with our beliefs and the things we're passionate about."

Miller has asked that people concerned about his allegations not boycott the business, but rather, speak up and ask them to do the right thing. "I think it would be a good gesture for customers to come in and show support for the workers." He says offering them words of encouragement and demanding management treat them fairly can greatly effect change. He is currently working on a petition for the latter.

St. Laurent stressed her commitment to all her workers remaining employed, saying every worker has a place at Amelie's "as long as you're not mean and you own up to things when they go wrong."

Ana McKenzie contributed to this report.