Here is the entire Bill Moyers doc on N.C. that UNC-TV tried to bury

As we previewed in this blog, renowned journalist Bill Moyers and his cohorts at Moyers & Co. produced a first-rate documentary, "State of Conflict: North Carolina," about our state's political upheavals, and billionaire Art Pope's influence. Normally, UNC-TV broadcasts and promotes Moyers' shows, and for good reason: he's popular, and the shows are of high quality.

So of course one would assume that since this popular journalist had produced a documentary about the state where UNC-TV is located, for Pete's sake, North Carolina's PBS outlet would show the documentary on two or three of its channels, particularly its primary one, broadcast locally on Ch. 58 (Charlotte cable 13). That assumption, however, would have been wrong, as it ignored a fundamental fact about UNC-TV: the formerly very independent outlet for public affairs journalism is now under the heavy thumb of the Tea Party pinheads in the General Assembly. 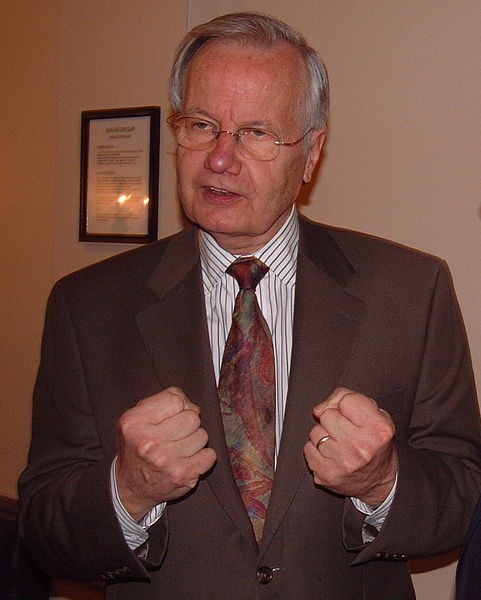 As we reported, the Moyers show was finally relegated to the UNC-MX channel, a part of UNC-TV's subset of "other" channels. To be blunt, most North Carolinians have never even heard of UNC-MX, which is available only to digital cable subscribers, and viewers with a digital antenna connected to a TV with a digital tuner. In other words, the show was buried here in North Carolina. But hey, at least someone in UNC-TV's PR department was able to say, "We did broadcast the show." Now, neither I nor others who've looked into the matter, such as Camel City Dispatch in Winston-Salem, have clear evidence that Art Pope's flunkies pressured the state's public TV network. Truth is, they didn't have to, as the organization has been cowed into self-censorship by the far-right mood in state government, as well as the appointment of such new far-right members of the UNC-TV Board of Trustees as sci-fi writer Orson Scott "Obama is Stalin" Card and Dept. of Health and Human Services honcho Aldona "What Medicaid Problems?" Wos.

So, for those who wanted to see the show but couldn't find it, or don't get UNC-MX, or don't have an HDTV antenna - or for readers who are just now finding about Moyers' terrific documentary - here is the entire show. It's your public TV, and I figure you should at least have the option to see a great film about your own state. Enjoy.