As the Avett Brothers walked on to the darkened stage at Time Warner Cable Arena on Dec. 31, Seth Avett made his way forward, stopped and simply looked around. Soaking in the moment of finally performing in Charlotte's largest venue, filled with people cheering for their hometown band, you can only imagine what thoughts were going through his, or any of the band member's, mind.

As the first notes of "Open Ended Life" were struck and the arena erupted, the Avetts began to sing, dance and stomp their way through a handful of songs with energy I hadn't seen from the band in years. With time, they had toned down much of the stomping, screaming and jumping around that they used to do.

While Scott Avett stomped on his kick drum, cellist Joe Kwon shredded through his bow. Seth was all smiles as bassist Bob Crawford remained his usually more-reserved self. Tania Elizabeth, a founding member of the Duhks who is featured on the Avetts' latest album, Magpie and the Dandelion, was also adding a bit more country/bluegrass vibe to the songs. The energy coming from the stage told the crowd, "this is a celebration" and "this isn't the same band you heard the last time."

If only it had lasted that way through the midnight hour.

That's not to say it got "bad," but adrenaline wears off and the energy tends to settle a bit as time goes on. Though appreciative of the applause, the Avetts didn't address the crowd much. They didn't even address the nearly six-foot diameter disco ball that crashed through the stage after opener Shovels & Rope left the stage (thankfully no one was hurt, and the shining globe sat front and left-center for the duration of the show.)

While portions of the show felt flat, it was only in comparison to the opening salvo. Overall, the performance was consistent and solid and the group provided plenty of stellar moments. 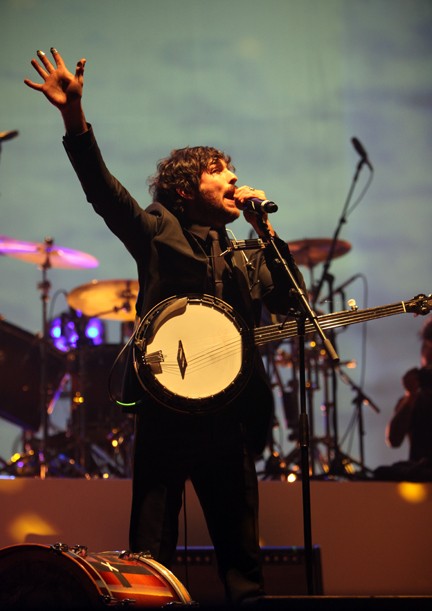 Scott Avett walked alone to the end of a long ramp to sing "Murder in the City." It was followed by Seth, alone, performing "The Ballad of Love and Hate." The Avetts' father, Jim, and sister, Bonnie, joined Seth, Scott and Bob Crawford at the ramp for a sparse, church-like rendition of "The Old Rugged Cross."

As the clock wound toward midnight, an energetic "Kick Drum Heart" led way to a few-minute break before the group returned to welcome in the New Year. That's when things really fell apart. While Seth noted that they'd be counting down, it was difficult to follow the series of numbers, symbols and hand gestures being flashed on a large screen behind the stage.

Before anyone in the quiet arena knew it, the hands were signaling 3, 2, 1 and it was midnight. Scott grabbed the microphone and said, "That's it! Happy New Year!" No countdown with the crowd. No big buildup. It was all more of a - "Whoops, there it went!" As people cheered and the band launched into "Auld Lang Syne," white, gold and silver balloons poured down from the rafters.

The band played a few more songs, including "Talk on Indolence" from the band's 2006 album Four Thieves Gone before closing with the appropriate "I and Love and You" and "Life." A brief encore included a cover of John Denver's "Thank God I'm a Country Boy" and the return of Bonnie and Jim for a set-closing a capella rendition of "Goodnite Sweet Heart Goodnite." 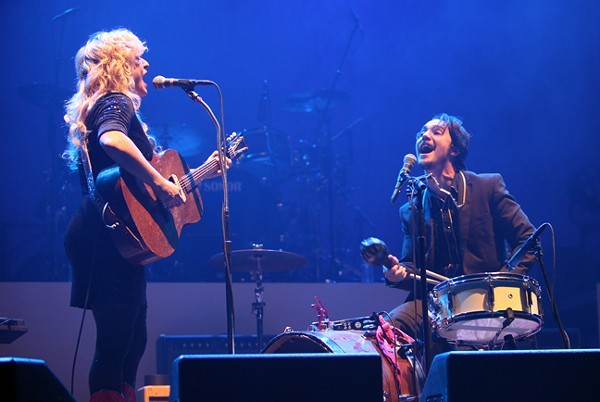 In combination with a one-hour set by Shovels & Rope (to our readers - no sign of Townes Van Zandt), the night provided a night full of strong folk-infused performances. The Avetts, through a set touching on old and new songs alike, displayed their talents while providing a bit of a map showing how far they've come since the early days. 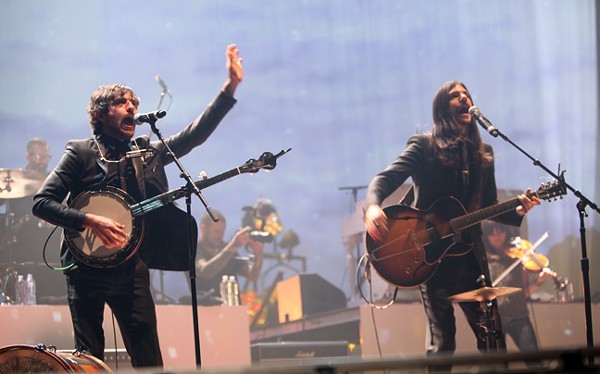