Today, Sea World of Orlando, Fla., goes before the U.S. Court of Appeals in Washington, D.C., to begin its appeal of a federal penalty levied against it after the February 2010 death of Sea World trainer Dawn Brancheau. Brancheau drowned after she was dragged underwater by Tilikum, a bull orca, or male killer whale. The veteran trainer had worked regularly with the orca before it killed her.

Sea World, part of the Busch Gardens Corp., was fined $12,000 by OSHA - at most a half-drop in the company's bucket - which explains why the appeal is directed toward doing away with the additional safety measures required of Sea World by the U.S. Labor Department. Those requirements include a prohibition of "close contact" between Sea World trainers and killer whales during performances. A judicial confirmation of the new safety measures could be a big blow to Sea World, as it would take away the pizazz element of the popular shows and would no doubt cost the attraction a ton of money. Sea World's lawyers, of course, aren't talking about lost revenue; they say they're more concerned about the safety and welfare of their trainers and whales. Of course they are. 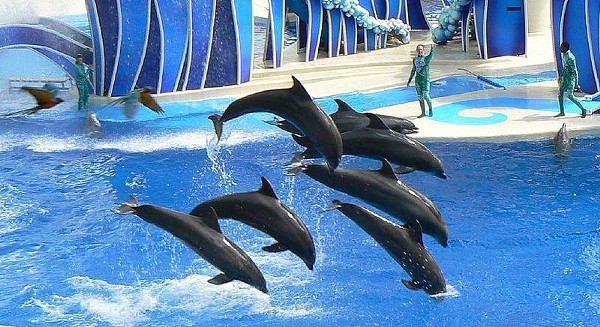 I wrote about the Sea World case in 2010, quoting a song by Neko Case titled "People Got A Lotta Nerve," of which here are some of the lyrics:

You know they call them "Killer Whales" / But you seemed surprised when it pinned you down / To the bottom of the tank. . . . I'm a man-man-man, man-man-man eater / And still you're surprised when I eat you.>
Right after Brancheau's death, discussions centered on why the whale did it, and what can be done to keep such a tragedy from happening again. Now, I'm not a marine life trainer, but as Ms. Case put it, those animals

For real. Let intelligent beasts like killer whales live normal killer whale lives. Why capture, confine, and cash in on creatures we say we like so much? If we like them all that much, then for God's sake, let them live their own lives. It would certainly be more respectful of the qualities we say we love in wild animals: their "awesome power," their "nobility." Frankly, it's hard to think of anything less noble than being kept captive and made to do tricks in order to be fed.

Some scientists and others say that humans have a natural affinity for animals that dates to our pre-agricultural days when we lived in closer contact with animals. So it's normal, they argue, for people to flock to animal exhibits and "shows." I still feel the way I did in 2010, when I wrote that even if we accept those arguments, "we could adopt another type of affiliation with the natural world, at least where it concerns wildlife. If we really do long for a re-connection with our old colleagues, so to speak, because we've so changed - some would say ruined - our relationship with them, couldn't we at least do the one thing we humans can do that wild animals can't? Couldn't we get outside ourselves, outside our own selfish focus, and forego the circuses, zoos, marine animal shows and the like? Couldn't we relate to these other living things, once our partners long ago, by agreeing to finally, once and for all, leave them alone?"

A documentary film, Blackfish, deals with the Sea World orca controversy. CNN Films bought rights to the film, and premiered it on the channel in late October. It has now shown the film over 10 times and public reaction has been heavily anti-Sea World. Here is the trailer to the film: