Even if you walked into the Fillmore expecting an instrumental performance by Galactic on Nov. 7, 2013, chances are you walked away talking about Maggie Koerner. The Louisiana native has been on tour with Galactic for a few months and simply blew the doors off of the N.C. Music Factory venue with her strong vocals and spunky dance moves.

That's not to say the music of the New Orleans band is anything to brush aside - drummer Stanton Moore, bassist Robert Mercurio, guitarist Jeff Raines, organist Richard Vogel and sax player Ben Ellman were stellar in their performance, bringing plenty of grooves and jams to the few hundred in attendance. But it was Koerner who garnered the most attention. 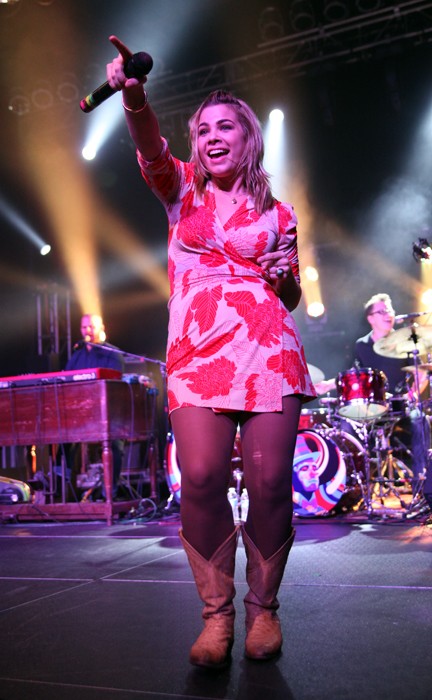 Koerner performed on more than half of the songs in the band's nearly two-hour set, singing a mixture of her own tunes ("He Calls Me Momma," "Lee Malone") Galactic songs ("Hey Na Na," "From the Corner to the Block") and covers ("Gimme Shelter," "From a Whisper to a Scream").

Galactic oftens features guest vocalists for their tours, most recently hitting the road with former Living Colour frontman Corey Glover. For the last few months, it's been Koerner, who is featured on Galactic's album version of "Hey Na Na" from the band's 2012 album, Carnivale Electricos.

The Southern chanteuse offered a stunning blend of jazz, soul and rock vocals, which nicely complimented Galactic's organic backdrops. She danced her way around the stage while the band explored the borders of their songs through improvisation, and commanded attention front-and-center when she belted out the best of notes. It all culminated in the second song of the encore, a blistering cover of the Rolling Stones' "Gimme Shelter."

The night started with a brief disco-infused set by The Stepkids and 75-minute jam-filled exploration courtesy of Karl Denson's Tiny Universe (keep an eye out for guitarist DJ Williams), but it was Koerner's performance who had people talking well after the last notes rang out.

Encore
From a Whisper to a Scream*
Gimme Shelter*