Steven Furtick of Elevation: What a surprise - another loaded preacher

Steven Furtick, the honcho/pastor/barker of Elevation Church, finds his rear in a sling today, after Stuart Watson and of WCNC broke a story that reveals details of Furtick's new house. It turns out that the pastor, whose church has eight different locations in four counties and takes in around $400,000 a week in collections, is building a 16,000-square-foot gated home on a 19-acre wooded lot in Waxhaw. 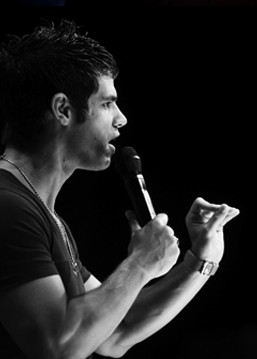 The property's tax value is $1.6 million, but before you start thinking Furtick is fleecing church members, remember that the 33-year-old quasi-hipster pastor's lawyer told the O that just a measly 8,400 square feet of the house will be heated. The attorney also says Furtick is using money he has made, and hopes to make, from sales of his books to purchase the property "and it's not tied to the church in any way." Except, of course, that without the church, nobody would buy Furtick's books.

OK, some are saying, doesn't Furtick have every right to spend his money the way he wants as long as it's legal? Of course he does. BUT, here's the problem, which neither Furtick nor his lawyer are addressing: When you are a self-professed "man of God," you are assumed to have a higher calling then, say, an investment banker - particularly if you're an ostensibly Christian pastor, since Jesus made kind of a big deal about helping the poor and not being a show-off and the like. There's also the little matter of this city's history, namely it was the home of Jim and Tammy Bakker's PTL Club, which went to ruin - and prison - during the organization's money-and-sex scandals of the late 1980s. I am not saying Furtick is as big a sleazebag as Bakker was - for one thing, Elevation Church did give away $2.5 million to various philanthropic groups last year - but one would think that a smart clergyman, or at least a non-narcissistic one, would be more aware of the critical importance of appearances for someone in his profession.

Protestant mega-churches are a distinctly American invention, the place where the nation's church-going ways have intersected with its go-go striving for wealth. The funny thing is that they've now come to resemble the Roman Catholic Church during the Renaissance - lavish digs, plenty of money, visual tackiness, even sex scandals. There was a justifiable revolt against the excesses of the Catholic Church back then - it's called Protestantism. You would hope that a similar revolt is in the works for those who run the mega-churches, merchandise their founders' message of helping "the least of these," and brag during sermons about their upcoming Hawaii vacations. Or who browbeat their churchgoers for more and more money. Take a look at this video of Lead Barker, er, Pastor Furtick making it clear how badly he wants his churchgoers to cough up a lot of money for his church, telling them, "That's God money, it's not your money, big boy." You tell 'em, Steve.

This story has been updated to include the following information: Stuart Watson of WCNC broke the story, not the Charlotte Observer, as was previously reported in the piece.