Even as a kid, I was prejudiced against literature's greatest vine swinger. Though they saturated TV for a long time, I don't think I ever watched a single Johnny Weissmuller flick from start to finish. When Greystoke and Disney's animated Tarzan attempted to revive the Edgar Rice Burroughs legend decades later, I passed. When David Henry Hwang adapted the animated feature for the stage, and Phil Collins added new songs, New York critics sufficiently savaged Tarzan the Stage Musical in 2006 for me to keep my distance. 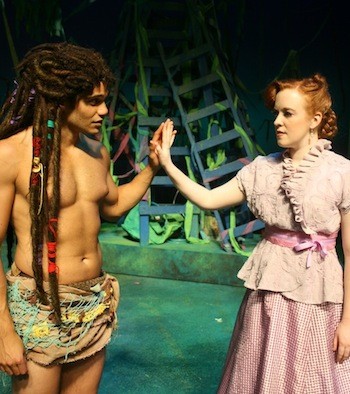 Well, now it's here, opening Children's Theatre of Charlotte's 66th season, and you know what? It's a wonderful production of a wonderful, meaningful story.

There are vines everywhere in Ryan Wineinger's bosky set design, including out over the audience in McColl Family Theatre, sending ImaginOn into yet another tech overdrive - and parents and kiddies into paroxysms of awe and delight. We follow the story from Tarzan's infancy, starting with a fairly spectacular shipwreck that casts his parents ashore into the hostile jungle, so our point-of-view looks outwards from inside the apeman's habitat when Jane, her kindly father, and a predatory poacher-guide invade their territory.

By the time Tarzan joined his ape family, as Kala's maternal instincts proved sufficient protection against her mate Kerchak's antagonism and wary suspicions, I made a happy discovery. Outside the covers of a book, theater is the best medium for this story. In movies, Tarzan must be raised by real apes or cartoons. Onstage, our imaginations conspire with human actors, all clad in costumes by Courtney Scott that superbly balance dignity with bestiality, adroitly directed by Michelle Long. The effect is magical for young and old.

Whether the Collins songs enhance or weaken this happy medium is open to question, but the Children's Theatre cast certainly put the score in its best light under the musical direction of Drina Keen. Yet it's Long's work that makes this gem so precious.

Most of the casting is fairly straightforward, with the nicely sculpted Isaac Gay as Tarzan and vivacious Polly Hilton as Jane. I'm particularly tickled by Chad Calvert, who likely saw himself as Jane's father when he showed up for auditions. Long has the inspiration to cast him as Kerchak, and he is magnificent, providing exactly the right bulk, menace, and nobility we want in the ape chieftain. The voice has always been formidable, but we've never seen him move like this onstage. Calvert is the snarling sinew of this piece, perfectly matched with Tempestt Farrar as Kala, who torches every power ballad she touches in her Charlotte debut.

Two child ensembles populate Tarzan's family tree and dramatize his childhood. Occasionally, the Red Ensemble led by Jordan Long as Young Tarzan reminded me how fraught with perils it is to have a child in a title role. But overall, the kids are an adorable asset who will entice more children to explore theater.

On the adult side of the cast, excellence runs deep. As the conniving guide Clayton, Sidney Horton has never been a more distasteful villain, and yet I found just enough backbone underlying Dan Brunson's idealism as Jane's father, Clayton, to reassure me that Tarzan would not come to harm. Of course, comically annoying sidekicks are an American staple that extends even beyond Disney, and Jordan Ellis's turn as Young Tarzan's pal Terk is a shower of sunshine, athleticism, and Hollywood.