Charlotte writer-director Fred Forte, Jr.'s first film, Weight, took several awards at the 2013 Charlotte Black Film Festival, including one for Forte himself as Best Director. Now he's back with his second feature, Petey, which will premiere locally this weekend. In advance of this special screening, he took time to answer a few questions regarding his film. 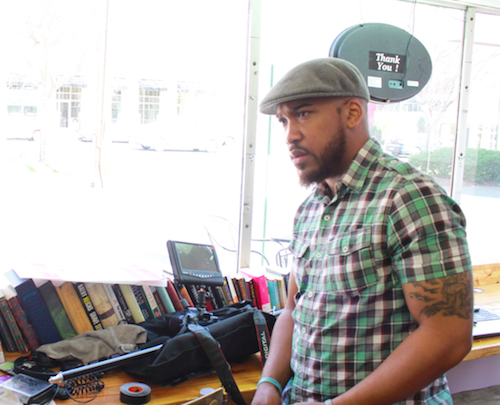 Creative Loafing: How would you describe your new movie to someone who hasn't seen your website and knows nothing about it?

Fred Forte, Jr.: I'd tell people it's a romantic comedy about a guy who's never been lucky in love. He gets his shot when Cupid goes on a much-needed vacation and asks him to take over. It's really a spin on the classic story of Cupid.

How do Cupid and your protagonist, Petey, meet?

Petey has had a lot of misfires with women. He's tired of his life. So he makes a wish and asks, "Where's Cupid when you need him?" And Cupid appears.

What inspired you to write the story?

My friends. A lot of them remind me of Petey. We'll be talking guy talk, and they'll say,
"You know, it's hard to find a woman in Charlotte." But they're not really putting their true selves out there. Sometimes, men can put on airs. So, yeah, I didn't have to look far for inspiration.

You mention that some of your friends haven't found the right woman - or found love - in Charlotte. Have you?

No, so I guess I'm a little like Petey, as well. My friends and I - we coach each other. But the difference is, my friends are on the hunt. I'm not really looking. (Laughs.)

So, the story is set in Charlotte. What are some of the locations people will recognize?

There's a lot people will recognize. We filmed Uptown, at the Chicken Coop [Price's Chicken Coop], at Common Market [in SouthEnd] and at Vapiano.

Is Charlotte important to the story?

It is. Petey's a delivery guy for Common Market, and rides his bike everywhere. So he knows the streets well.

You cast WPEG's Nolimit Larry as Cupid Jones. How did that come about?

I had done a film with Power 98's Church Boy and Yasmin, so Nolimit and I were familiar with each other. Nolimit actually reached out to me because he liked what he had seen of my work. He has an acting background and said he wanted to get back into performing. I was just beginning the script for Petey, and thought he was perfect for Cupid.

What was it like working with Nolimit? What did he bring to the role?

He brought energy. The man is always high, always ready to go. I asked him if he ever sleeps. He was great, and he took the role very seriously. He studied hard; he asked questions; he knew his lines. This is what he loves to do.

Did you always see Cupid as a black man?

Petey's white. Was that important?

I wanted the challenge of making him different from what I know. It would've been easy to write him as a black man, but I wanted to challenge myself to write from another perspective. I was glad that Justin Smith, who plays Petey, approved of what I'd written. Petey and Cupid approach life from such different places. The contrast is what makes this film so funny.

But Cupid had to be black. Petey could've been anything.

How did you choose Justin Smith for the title role?

Petey was the last role we cast, and it was the hardest to cast. I saw Justin's head shot, and I just knew. He was Petey.

Did you only film in Charlotte?

Yes, the entire movie was filmed exclusively in Charlotte. This city is my home; I grew up here. It makes a great setting for a film. My vision is to raise awareness of local filmmaking. Charlotte's known for its music, politics and sports, but filmmaking has a home here, too.

(The movie Petey will be screened at 7 p.m. Saturday, Aug, 17, in CPCC's Halton Theatre. Tickets are $10. To purchase tickets, go here. For more information on the movie, go here.)