Ohhh, hell. And you thought the voter-ID bill was bad. Now that the U.S. Supreme Court has gutted the Voting Rights Act, GOP lawmakers in the North Carolina General Assembly are getting ready to make voting in future elections as hard as they please for Democrats. That's what the Los Angeles Times is reporting today. Specifically, the Times says that GOP leaders here are planning to eliminate early voting, Sunday voting and same-day registration. Just like that. 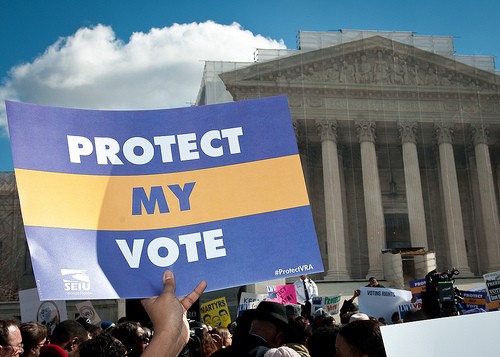 The Supreme Court's decision last week means that nine states and parts of six others, including 40 of North Carolina's 100 counties, no longer have to pre-clear election-rules changes with the U.S. government. Because as we all know, racism is a thing of the past in America. All of a sudden, now that North Carolina doesn't need to get a passing grade from Uncle Sam, Senate Rules Committee honcho Tom Apodaca announces on Monday that the long-discussed voter-ID bill - as well as "broader election changes" - won't be ready this week after all because lawmakers are still working on it.

I bet they're working on it. And I bet they could kick themselves for not beating Texas to the punch. In Texas, home of most crappy ideas about government that've arisen in the past decade or more (as dutifully and humorously explained in Gail Collins' book As Texas Goes), the legislature waited two whole hours following the Court's decision to announce plans to carry out a massive gerrymandering, er, redistricting plan and to implement the most restrictive voter-ID law in the country.

So here we go, once more with the GOP, forward into the past. This time, it's the Old South's dismal, discriminatory past. The Voting Rights Act isn't even cold and buried yet, and the race to deny voting rights to minorities is already on. Chief Justice Roberts said that the Voting Rights Act wasn't needed anymore since "things have changed" in the Southeast. One thing that apparently hasn't changed at all is many Southern conservatives' prejudices and their willingness to write their biases into law. As Stephen Colbert remarked, yes it's amazing how much things have changed - espeically since the Voting Rights Act required voting rights justice for everyone, not just for white people. It's the law that changed things, Justice Roberts, not that the urge to screw over minorities has miraculously died off.

Here is an excerpt from the L.A. Times story that is relevant today, to say the least:

Rosanell Eaton, 92, remembers the humiliation for blacks who sought to cast ballots in North Carolina before the Voting Rights Act. In 1939, she . . . rode to the courthouse in Franklin County, N.C., to register. Three white men, probably illiterate, demanded that she recite the preamble to the U.S. Constitution. Eaton, the valedictorian at her rural high school, recited the preamble word for word.

"They were so ignorant they didn't know if I said it right or not - but they registered me," she said. Last week's Supreme Court decision "starts taking us right back to the old days," she said. "Now it's easier for these Republicans to do anything they want to us, without the controls we had."