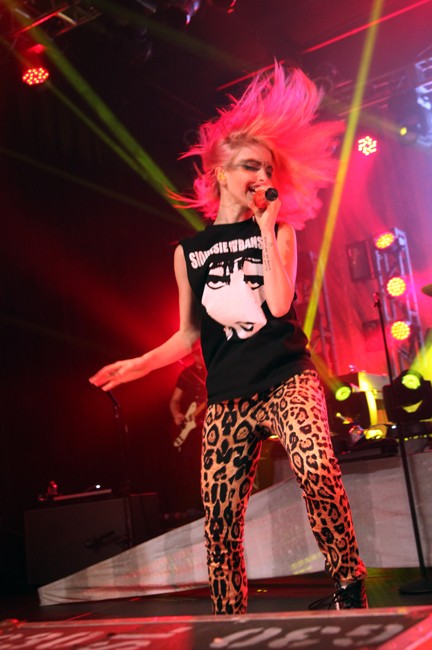 A new album (the group's first in four years) and its first tour on American soil in far too long had Paramore's already ravenous fans literally clawing at the barrier separating themselves from the three original members left standing Monday night. And, no, the sold-out Fillmore wasn't only filled to the brim with tweens - though many had bright hair in an effort to imitate their idol. Paramore is one of the few modern bands which brings together generations. Yes, the tweens and legions of fans which grew up alongside Paramore were there, but parents and grandparents were there too, and they were having just as much fun as the kids.

The moment guitarist Taylor York and flame-haired singer Hayley Williams stepped on stage with only a ukulele to counteract Williams' impressive vocals for "Moving On," the intro on the band's new self-titled album, the roof was pretty much blown off of the place.

The new album was released in April after a public showdown between three bandmates (York, Williams and bassist Jeremy Davis) and brothers Zac and Josh Farro, who left the band suddenly in what Williams called "a bit of a soap opera." With lyrics like "Let em spill their guts, cause one day they're gonna slip on 'em... if they can't get down, well we don't need them around," it's obvious a lot of the new record is an outlet for the band's anger.

But it's clear this is also a band which has moved on from past drama and is happier than ever - they launched into old favorites "Misery Business," "For a Pessimist" and "Decode" before unleashing the band's current single "Now." While old Paramore was a bit angsty, happiness radiated from the band as they danced across the stage, making their old songs more than just a nostalgic look at what used to be. They made it more of a celebration that they are still here despite it all.

Taking the place not-so subtly of the missing Farro brothers were a pair of touring musicians, but Williams made sure the focus was on the three up front, dancing across the stage furiously and teasing the crowd. Williams manages to connect to the audience in such a way that it doesn't come off as a show, but as sincere.

Paramore's sound was as frantic as Williams' dancing, and the band effortlessly slid from rock to funk and back, all tied together with the irresistible pop sound of "Still Into You" as the finale. By that point there were literally tears from some fans, especially the lucky few Williams dragged onstage to provide gang vocals for "Anklebiters."