I am not a sports fan, but last week I paid close attention to one NBA player.

Jason Collins made history as one of the first active athletes in America's four major sports leagues to come out as gay. Let's hear it for the man!

Collins, who plays for the Washington Wizards, wrote himself into the books with a simple statement, published in his Sports Illustrated Magazine story. "I'm a 34-year-old N.B.A. center. I'm black and I'm gay." 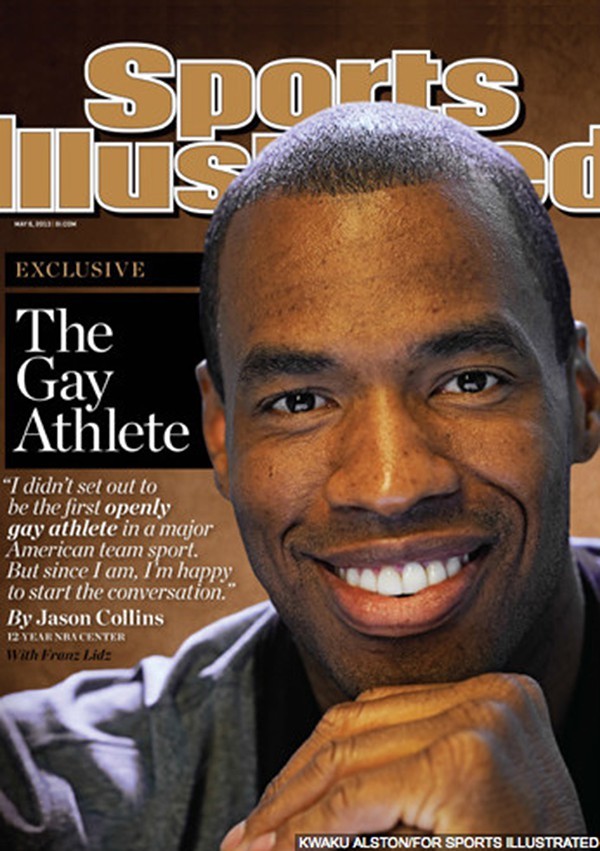 With those simple words Collins has put himself in the national spotlight and has, in his own way, become a modern-day Jackie Robinson. Just as Robinson broke the major league baseball color barrier, which ushered in a new era in professional sports for minorities, Collins has bravely opened the closet door for other gay athletes to play and walk in their own truth.

Collins should be applauded for his strength and courage for coming out in a historically homophobic industry. (I don't want to ignore another big announcement, made just before his. The WNBA's Brittney Griner's also recently pulically acknowledged that she is gay.)

Collins' announcement is historical on so many levels. White gay youth have many folks to look up to in the realm of mentors, including TV personality Ellen DeGeneres, news man Anderson Cooper and actor Neil Patrick Harris. It is a very different story for gay youth of color, especially for young black gay men. Now they have a role model in Collins, who represents an accomplished, successful, openly gay black man. I think his influence will reach millions of people.

But of course there are those who think aspects of life should be compartmentalized - those who think a person cannot express multiple levels of diversity. I have experienced this firsthand. My sexuality often will put me at odds with those in my community. They will challenge my manhood, my blackness, and, yes, even my faith.

Collins was recently challenged by ESPN's Chris Broussard, who essentially said that Collins could not be a Christian if he were openly and actively gay. The NBA analyst told Outside the Lines: "If you're openly living that type of lifestyle, then the Bible says you know them by their fruits. It says, you know, that's a sin. And if you're openly living in unrepentant sin, whatever it may be - not just homosexuality. Adultery, fornication, premartial sex between heterosexuals, whatever it may be - I believe that's walking in open rebellion to God, and to Jesus Christ." (Broussard later issued a half-apology, tweeting from his personal account that his was a "personal opinion as it relates to Christianity.")

Collins reacted, saying, "my response is, first, I am a Christian. I know other gay and lesbian members of the community, the LGBT community, who are practicing Christians. This is all about tolerance and acceptance and America is the best country in the world because we're all entitled to our opinions and beliefs but we don't have to agree. And, obviously, I don't agree with his statement. This is where the discussion begins."

It is amazing that Collins had the strength to step up, and I hope more follow his lead. If, as studies show, 10 percent of the population is gay, then there are plenty of other athletes poised to bust out of the closet.

But, as we know, major-league sports figures are as famous for their off-game activities as they are for the time they spend playing the sport. Men especially are given rock-star status, which includes being expected to have a bevy of female groupies they sample and consume. How does this culture of hyper-sexuality deal with gay men? Perhaps it won't. Gay athletes potentially threaten these institutions to their very core.

I honestly don't know why. How could a bunch of men at the top of their physical form, wearing skin-tight outfits running around chasing each other, tackling, jostling on the court and slapping each other on the butts not accept their gay brothers?